Home Brighton Hughton hails the ‘legend’ that is retiring Bruno 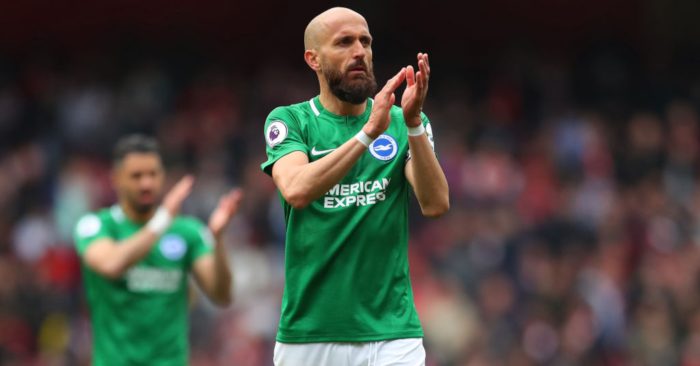 Chris Hughton hailed Bruno as the driving force behind Brighton’s Premier League elevation ahead of the Seagulls captain’s impending retirement.

Club skipper Bruno has confirmed he will retire after Sunday’s Premier League season-closer against Manchester City at the Amex Stadium.

The 38-year-old has made more than 200 appearances in seven years at the south coast club, leaving manager Hughton full of praise for the veteran defender.

“To put it simply, Bruno has been outstanding – for the club and also for me personally,” said Hughton.

“He was already a legend here when I arrived as manager and what he has done since then has been instrumental in our progress as a football club.

“He has been a key figure in our promotion to the Premier League and in our two seasons at that level too.

“He is 38, playing in the best league in the world, but his performances have belied his age.

“Personally, and on behalf of the football club, I would like to thank Bruno and wish him well for the next chapter.”

Bruno’s final Brighton outing will prove the denouement of this term’s relentless title battle as City and Liverpool slug it out one more time for the league crown.

Liverpool host Wolves while leaders City will hope to retain their title with a win on the south coast.

Brighton revealed they also hope to keep former Espanyol and Valencia full-back Bruno on hand at the Amex Stadium in an off-field capacity in future.

The club will hold talks with the long-serving star in a bid to determine whether that becomes a coaching or ambassadorial role.

“When Bruno signed for the club in 2012, we knew we were signing a player with proven quality, but what also impressed us was the personality that came as part of the package,” said chairman Tony Bloom.

“Intelligent, honest, compassionate to others and always very approachable, he possessed the perfect traits to eventually become our club captain.

“On the pitch he has been a talisman, a player who has always inspired those around him with his performances, while off the pitch his total professionalism is the reason why, at the age of 38, he has still maintained the very highest levels – indeed, he was one of our best players at Arsenal last weekend.

“Bruno has become part of the fabric of this football club, this city, and our relationship will not end with his impending retirement.

“He will always be a part of us and I wish him and his family all the very best for the future.”

Chief executive Paul Barber added: “Bruno has been a true gentleman, full of integrity and decency.

“I will miss working with him in his capacity as club captain and would like to wish Bruno and his family well for the future.

“After a playing career spanning more than 20 years, Bruno will spend some time with the family and consider his next move – but we very much hope that his future will still be here, with us, in some capacity.”