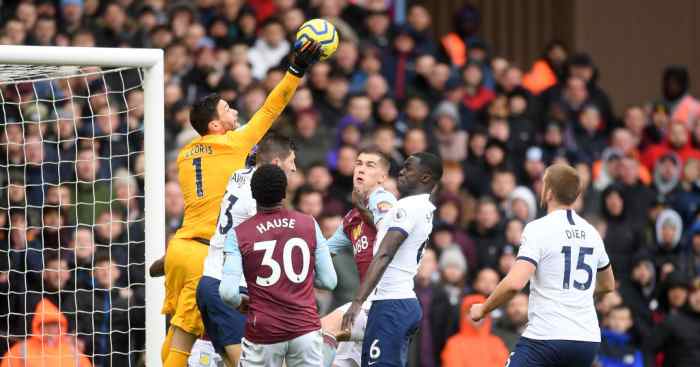 Hugo Lloris has dismissed suggestions Tottenham’s recent form is a fluke after winning three matches in a row.

A third straight win saw Jose Mourinho’s side climb to fifth – a position which could earn them a Champions League spot after Manchester City’s European ban for breaching Financial Fair Play rules.

Spurs beat City 2-0 earlier this month, with Lloris saving Ilkay Gundogan’s penalty and the visitors missing a string of chances, while Son’s 50th Premier League goal that saw off Villa came after a defensive error.

“I don’t think it’s about luck,” goalkeeper Lloris told the Evening Standard. “If you look at some games earlier in the season, we were very unlucky. We know we can do much better.

“Especially at this period of the season, only the points matter. We had a difficult game. We have to give a lot of credit to Villa but we never gave up. We expected a tough game, it was a big battle played in difficult conditions with a lot of wind.

“There are a lot of positive things, we still need to correct the negative ones but we have to be happy with the result.

“We could have managed the ball better, especially in the first half. We gave too much possession away but away from home it’s never easy.

“They are playing for their safety, so we knew they’d start with a lot of energy. We conceded a goal not in the best moment but then we stayed strong.”

Toby Alderweireld’s own goal gave Villa the lead but the defender – whose partner had a son on Saturday – levelled in the first half.

Son’s first strike, when he followed up after Pepe Reina saved his penalty, put Spurs 2-1 up at the break but Bjorn Engels’ header made it 2-2.

Reina frustrated Tottenham with a string of second-half saves before he was beaten by Son after Engels missed a routine clearance.

“Let’s take heart from the performance we put on the pitch,” Reina told the club’s official site, with Villa a point above the drop zone.

“It happens, we all make mistakes. Engs has had a brilliant game but, unfortunately, it happens.

“We need to cheer him up because he’s been fantastic.

“During training over the last week or 10 days after the winter break, the team have done very, very well.