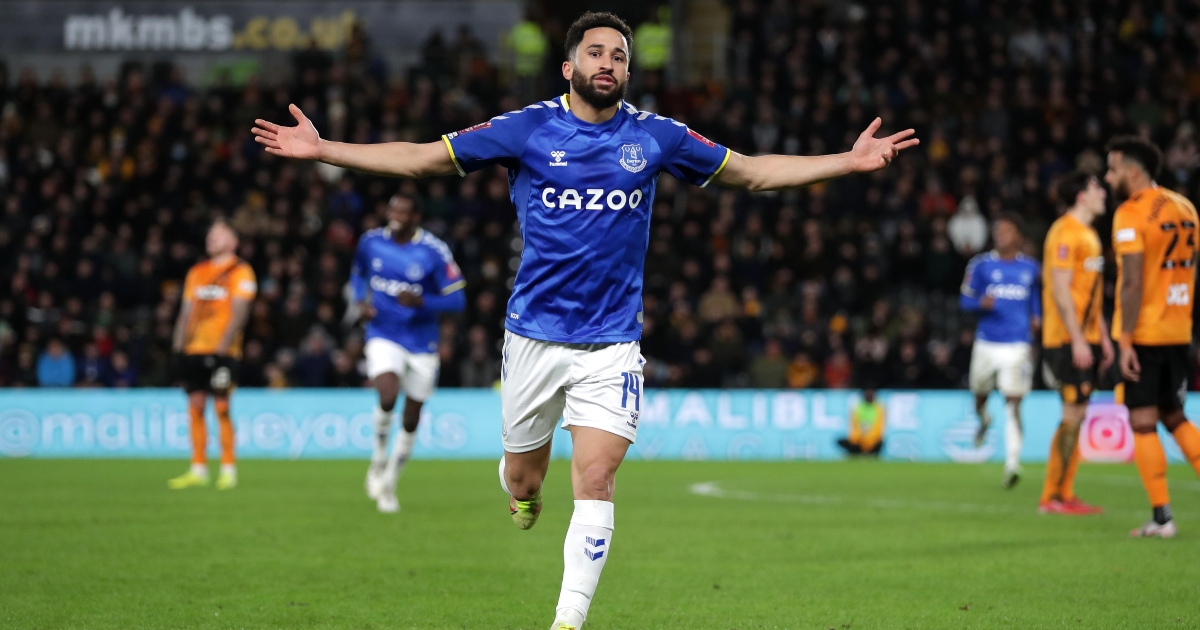 Everton avoided a scare to see off Championship side Hull City in the third round of the FA Cup, winning 3-2 after extra-time.

There were times on Saturday evening when it looked like Hull could again prove the end of the road for Rafael Benitez, but Townsend came to the rescue in extra-time as Everton eked out a 3-2 win.

A pulsating, topsy-turvy tie began in dream fashion for the hosts as Tyler Smith scored his first City goal inside 45 seconds in front of prospective new owner Acun Ilicali.

The Turkish businessman was attending his first match ahead of his takeover at the MKM Stadium, where Everton finally clicked into gear midway through the first half.

Demarai Gray slotted home after a superb one-two before Andre Gomes headed home a Jonjoe Kenny cross, with the Toffees continuing to push after the break.

But substitute Ryan Longman’s exceptional curling leveller from 20 yards took the match into extra-time, when Townsend would fire home a 30-yard rocket to seal progress.

An outstanding Asmir Begovic stop denied Tom Eaves taking the match to penalties on a night when Grant McCann’s Championship outfit made life difficult from the outset.

Everton, who gave new boy Vitaliy Mykolenko his debut, kicked off and quickly gave away a free-kick, which George Honeyman fired over for Smith to power home a header.

The visitors’ defending was poor and they continued to struggle, with Begovic forced to superbly deny Eaves powering home a fifth-minute header.

Smith glanced across the face of goal from the resulting corner as the visitors flailed, with Eaves stinging the palms as angry Evertonians made their feelings known.

There was a banner calling for Benitez to leave and chants of a similar nature, before the visitors levelled in the 21st minute.

Gray followed a nice flick and neat footwork with a quick one-two with Anthony Gordon, who played him in to slot past Nathan Baxter.

Provider almost became goalscorer as Gordon cut back and hit an effort off the foot of the post, before Gray forced Baxter into action from distance.

Everton saw penalty appeals for a Jacob Greaves handball ignored as Hull were penned back, with Michael Keane seeing a strike stopped before their pressure told in the 31st minute.

Kenny sent in a cross from the right that Gomes met with a bundled header that was too much for Baxter to handle.

Hull failed in their attempts to level before the break, with Everton looking most likely to score in the second half.

Greaves put an important challenge on Salomon Rondon and Gordon was denied by goalkeeper Baxter, before Gray was blocked out as Everton pushed for a third.

Hull had created precious little by contrast, but McCann utilised his bench wisely.

All three of his substitutes were involved as veteran Tom Huddlestone won possession, George Moncur darted along the edge of the box and laid off for Longman to bend a superb strike beyond Begovic.

It was a fantastic moment that Hull livewire Keane Lewis-Potter attempted to add to. He blasted over and struck the post during a period in which Gray curled agonisingly wide at the other end.

Football Association punishment may well be heading Hull’s way given the number of items thrown at Everton’s players during a second half that ended level.

An additional 30 minutes followed and a stunning Townsend strike settled things in the 99th minute. The former England international skilfully made space before blasting a 30-yard effort that swerved past Baxter.

It was a gut punch that Hull rallied from impressively, with Begovic coming to the rescue in the second period of stoppage time.

A corner found its way to Eaves, whose snapshot was denied by a strong one-handed stop before substitute Josh Hinds poked the ball wide.