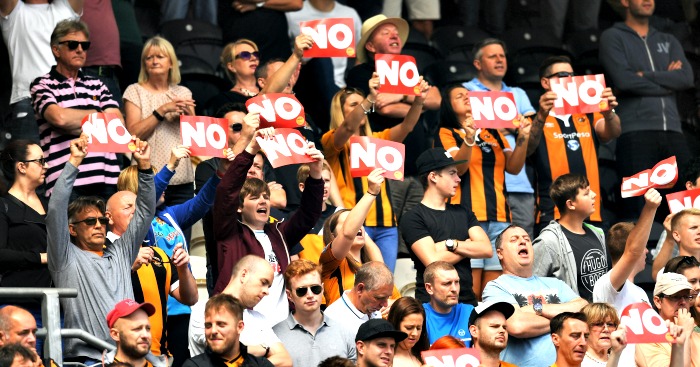 Oh, Premier League football. It was almost as if you had never left. The 2015/16 season had dedicated itself to proving that anything is possible, that experts, pundits and fans share one thing in common: We know nothing. This campaign begins with a team crowned champions of England just three months ago slipping to defeat against one dubbed potentially the worst the top flight has ever seen. The only surprise is that we were all surprised.

This was Leicester’s reward for their remarkable exploits last season. The champions’ privilege – opening their campaign against a newly-promoted side – had been bestowed upon them. Hull were the chosen victims, a lamb to the slaughter, one which was blindfolded and had his legs tied together. The Foxes had hunted down much bigger, must better prey last season. Heading into a difficult second series, this was a gift.

But Leicester do not read scripts. They care not for narratives or records. In losing 2-1 to Hull, they became the first ever Premier League champions to lose the opening game of their subsequent title defence. The previously lethal Jamie Vardy provided the outtakes for his upcoming film with a horrible performance; Wes Morgan was cumbersome; Kasper Schmeichel was questionable; Robert Huth was missed; Andy King and Danny Drinkwater’s combined efforts did not come close to replicating the departed N’Golo Kante.

Considering the build-up to this match, Leicester barely needed to be at half of their capabilities to win on Saturday. They needed only to turn up at the KCOM Stadium and Hull would roll over. Where the Foxes had provided the perfect example of the power of a club – the owners, the staff, the players and, most importantly, the fans – pulling in the same direction, the Tigers were the antithesis. They were the broken beast, the fractured club, one already consigned to relegation. Only unlike Leicester, there would be no miracle escape, no title victory. Failure and failure alone was on the horizon.

Disaffected. Disillusioned. Dissatisfied. Disgruntled. Discontented. Many words have been used to describe the Hull City fanbase this summer. Where promoted clubs eagerly anticipate the first fixture of the new season, the feeling in the East Riding was one of dread and apprehension. And not all of that was down to Jake Livermore having to play in central defence.

“No communication, no manager, no engagement, no signings, no identity, no concessions, no honesty,” read a statement from the Hull City Supporters’ Trust earlier in the week. ‘No hope’ was the not-so-hidden message. On stage, a performance of ‘Hull City: The demise’ was in production. Steve Bruce resigned three weeks ago, with his permanent successor yet to be appointed. Just two players had signed, but neither were for the first team. The match-winner in the play-off final deemed the Championship a more attractive proposition, as Mohamed Diame left for Newcastle. Injuries left the club with 13 fit senior first-team players, of which two are goalkeepers.

Behind the scenes, yet more bitter, contentious scenes were playing out. Takeover talks had stalled with numerous interested parties. Owner Assem Allam, the man who once told supporters to “die as soon as they want”, fell seriously ill. His son, Ehab Allam, was responsibly for introducing a controversial change to the club’s ticketing policy, scrapping concessions for pensioners and children. Some fans benefited with cheaper ticket prices, but many had been alienated.

Saturday was a cause for celebration, but instead fans carried through with their promise of protests. Club staff spent most of the morning attempting to remove graffiti from the area surrounding the stadium. ‘ALLAMS OUT,’ was the message. Red placards were held up by the majority featuring a simple message: ‘No.’ ‘No’ to Hull Tigers, ‘No’ to the Allams, and no more taking the support for granted. The club’s response was underhand, as ‘Hull Tigers’ adorned the advertising hoardings.

Predictably, many chose to protest in different ways. For the club’s opening fixture of the season, their return to the Premier League, hosting the champions of England, the empty seats were conspicuous – just as they had been in the play-off final against Sheffield Wednesday. Media outlets were quick to notice, but few even made reference to the owners, while rival fans – although far fewer than on that Wembley day in May – derived joy from the situation. As Daniel Storey wrote: ‘Rather than deride people for not attending games, isn’t it worth asking why? Rather than Hull’s support being “s**t”, maybe they’ve actually just been shat on?’ The treatment from owners to fans had not stopped for the summer, it merely grew worse, more disrespectful.

Most postured that the troubles surrounding the club would detract from the game on Saturday; far from it. Hull may be a broken club, but the players and fans are united. United in frustration, united in respect, and united in love for the club. There was no muted celebration from the crowd when the excellent Adama Diomande opened the scoring, nor when Robert Snodgrass struck a winner. The same fans celebrated a Sam Clucas overhead clearance just as loudly as they did the final whistle. ‘Amazing scenes, fans and players together. F*** you, Ehab,’ read a half-time message from fan site Amber Nectar. Even with the asterisks added, it was a defiant battle cry.

At the final whistle, Hull were top of the Premier League. The fans and off-field problems had not detracted from the game; the support had pushed the players to a memorable three points. The same fan site returned with a second post: ‘An astonishing victory, an incredible atmosphere, an amazing performance. You won’t kill this club, Ehab.’

Hull battled against the odds to beat the champions. David took on Goliath and he won. They did not give up in the face of adversity. Nor will the fans. Nor should the fans.