Home F365 Says Empty seats: Rarely a cause for mockery 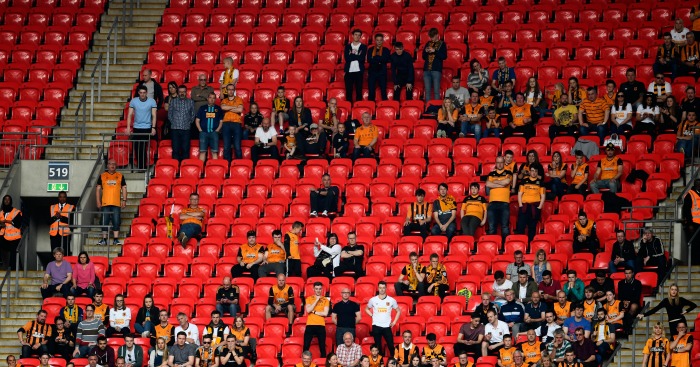 Such is the importance of the play-off final, nothing will ever overshadow the final result. Mohamed Diame’s second-half strike was breathtaking, and Steve Bruce’s Hull City deserved their victory. Like Middlesbrough last year, Sheffield Wednesday froze on the Wembley stage.

Yet for much of the afternoon, it was not Hull’s players who dominated the coverage of football’s richest game, but their supporters. The end of Wembley where Hull supporters sat was littered with empty seats. The area nearest the Wednesday supporters was closed off, such was the lack of demand for tickets.

Football deals pretty badly with empty seats. They are seen not only as an affront to the game itself, but a damning indictment of the club’s support as a whole. “Your support is f**king s**t,” was the regular taunt from the Sheffield Wednesday end of Wembley.

When you stop and think about it, that’s quite an odd thing to chant at those people who have made the game. Hull City have averaged under 17,000 for their home games this season, and yet took 26,000 to Wembley. Suddenly day-trippers and ‘glory fans’ are a good thing? This is a club that has spent the large proportion of its history outside the top two tiers, in a city which has two top-flight rugby league teams, one of which had a pre-arranged home game on the same day. It attracted 12,000 fans.

Media outlets made the same point. ‘A club now about to return to the Premier League should surely be able to sell more than two-thirds of their allocation?’ the Press Association asked. ‘Whatever that says about the commitment of people in East Yorkshire to religious pilgrimages, it doesn’t look great on the box,’ pointed out the Daily Mirror.

The insinuation is clear: If you didn’t go, you aren’t a good fan. Your club deserves not only your support, but your presence and money. Even if that was anything other than a bizarre assessment of where the onus lies, maybe it’s a reminder to the club that their supporters should not be taken for granted.

Hull City is a fractured club. The supporters have continuously battled against the ownership of Assem Allam, who has repeatedly tried to change the club’s name and generally acted like a bit of a douche. When fans protested against the name change (and were successful), Allam publicly stated that they could “die as soon as they want” and promptly put the club up for sale. There are an increasing number of Hull City fans who have fallen out of love with their club. Bruce siding with his boss has not helped to bring the parties together.

Add to these issues the high cost of tickets (£76 was the typical price), train fares (£100 each way was widely quoted) and the fact that Hull have been to Wembley twice in recent years, and suddenly those empty seats become understandable.

Perhaps being consistently reminded that the play-off final could be worth £170m doesn’t quite give you the same tingle when you know it’ll only go to an owner you despise, and may only make him more likely to stay? Believe it or not, the Premier League is not the Promised Land for every fan of every club.

Yet there is a wider issue here, namely football’s treatment of empty seats. Rather than deride people for not attending games, isn’t it worth asking why? Rather than Hull’s support being “s**t”, maybe they’ve actually just been shat on?

Gaps in the crowd in a football stadium are an unavoidable reminder that something is amiss, of that there is no doubt. But those blaming the supporters would do well to open their eyes to the ever-widening gap between football clubs and their local communities. That’s the real issue.

In 2008, 86,703 spectators watched Hull beat Bristol City to reach the Premier League for the first time. Eight years later, 15,000 fewer Hull supporters were in attendance. That isn’t a cause for mockery, it’s a cause for concern.