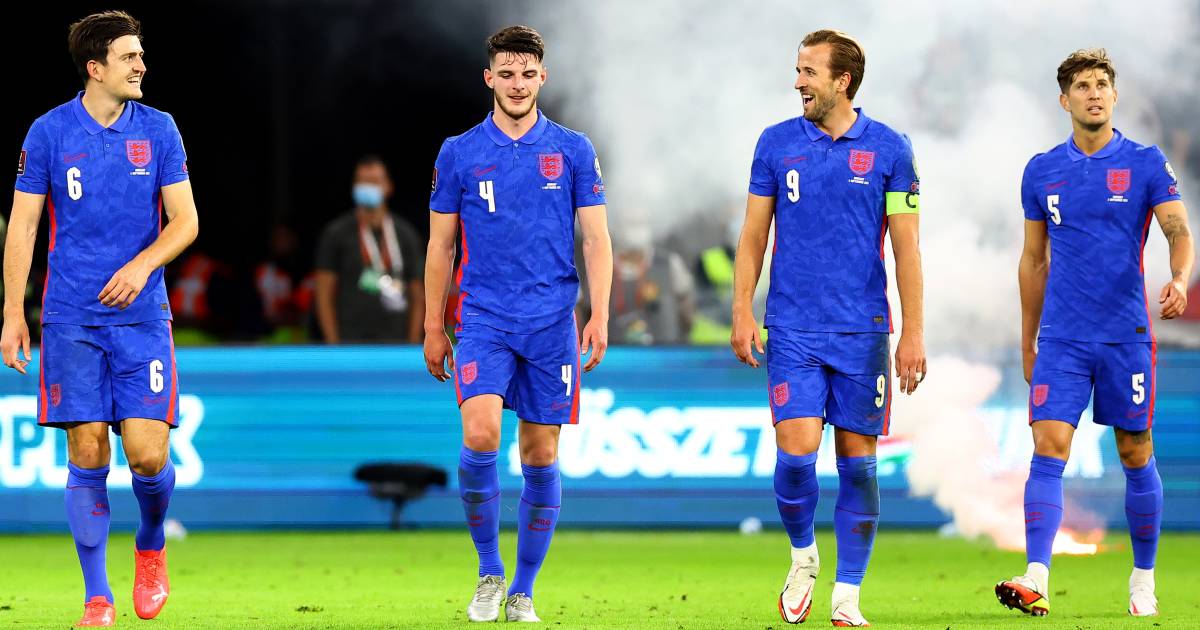 Very comfortable in the end for England against a team who made things very difficult for some Big Fish as the Other Team in the Euros Group of F. The fact nobody even worries about games like this being 0-0 at half-time any more is testament to the efficiency and reliability of Gareth’s England these days. They’re decent.

Read the full report on a result that represents a pretty hefty stride towards the World Cup here, but only after the ratings of course.

JORDAN PICKFORD
Clean sheets will always be welcomed by any keeper, and Pickford is building quite the collection for England. Unlike those he collected on England’s run to the Euros final, this one was an absolute piece of p*ss.

KYLE WALKER
Managed to make five tackles on a night when England had to do very little defending. A thoroughly professional 7/10 performance on a night chock full of them from the men in blue.

HARRY MAGUIRE
Embarrassingly easy the way he bullied his supposed marker to whack home England’s third with his massive swede. Given that his physical dominance of the opposition was occasionally and harshly penalised throughout the game, probably relieved not to have that goal wrongly chalked off.

LUKE SHAW
Very much an auxiliary attacker given England’s dominance of territory and possession and a left-hand side in which he, Grealish and Sterling were often to be found generally looked the likeliest route to success for the Three Lions.

DECLAN RICE
Pretty lucky to stay on the field after a daft challenge. A minute later he was winning the ball back to set England away on the attack that would lead to the opening goal. That was more typical of his performance in general but it could have been a very different story. Cracking player, though, who rounded off a fine all-round performance with his second England goal, assisted by Hungary briefly replacing their goalkeeper with an Abba-style hologram. And having a little drink from one of the cups hurled at Raheem Sterling after the opening goal was very funny if probably unwise. It put Harry Kane in a right fluffery buffery.

Never before have Actual Harry Kane and Athletico Mince Harry Kane been harder to separate than in this photo. pic.twitter.com/o3FGHhnEnm

KALVIN PHILLIPS
Great awareness and anticipation to win the ball back and get England away for the second goal. Four tackles and an interception represent just another game spent doing exactly what everyone expects England’s player of the year to do these days, and that is absolutely fine.

RAHEEM STERLING
Scored one and made one and was always a menace. Neither the finish for his goal nor the cross for Kane’s second were hit entirely purely but both were the product of the intelligent runs he makes all the time now – and in the case of the goal the intelligence of when he stopped his run to create the space in which Mount found him. Forced to endure horrendous abuse from the stands, amplified when he removed his shirt to reveal a message in support of a friend which was – presumably – wrongly interpreted by the crowd as an anti-racism message. We love him.

MASON MOUNT
Often the most advanced of England’s attacking players in the first half as Kane made his frequent and familiar trips into midfield. It speaks to both Mount’s quality, England’s confidence and the quiet authority of this side, of its credit in the bank now, that nobody even lost their mind about this, with widespread acceptance that England generally and Mount specifically were playing perfectly well in a low-key first half and that goals would likely come and if they didn’t a draw was still a perfectly acceptable result. It was nice, but also unnervingly weird. Great run and cutback down the left to create the floodgate-opening first goal.

JACK GREALISH
Very good indeed. Created a good chance for Kane in a first half where England struggled to create much and then thoroughly enjoyed himself in the second half. Perfectly weighted pass for Mount’s run in the build-up to the opener and finally got his own assist when teeing up Rice late on. Fouled four times, because he is always fouled four times in every single game.

Should have done better with the sort of in-space-on-the-edge-of-the-box chance from which he is usually at his most lethal but here leant back and sliced it over the bar having been nicely picked out by Grealish. Definitely should have scored early in the second half when released by Walker, but scuffed his shot horribly. Did score with a header after being picked out by a deflected Sterling cross. Then missed two more extremely presentable chances as Hungary faded. Still definitely lacking sharpness after his summer shenanigans and chicanery. That he nevertheless still has three goals to his name this season says much about his quality. And also, let’s be honest, the quality of Hungary and Pacos Ferreirra.

JESSE LINGARD (for Mount, 84)
Fun little runaround for Lingard, who attempted seven passes and was successful with five of them. That’s 71.4%. That’s a landslide.

JORDAN HENDERSON (for Declan Rice, 88)
A new contract and another England cap. Got to congratulate Rice for his goal in person, so that’s probably quite nice. Look, he didn’t do much but that’s hardly a criticism is it. He was only on for two minutes of a game long since over. This is already too many words to have written about it. Especially now after writing those words about how this is too many words. And those ones. Etc.

BUKAYO SAKA (for Jack Grealish, 88)
Did as much as Henderson but gets fewer words. Sorry.