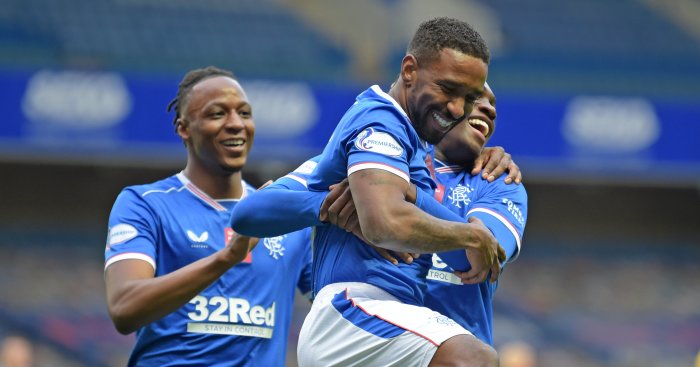 Jermain Defoe was delighted to hit a career milestone in style after netting his 300th club goal in Rangers’ 2-0 victory over Livingston at Ibrox.

The 38-year-old swivelled before running in behind the Livi defence and meeting James Tavernier’s lofted pass first time with his left foot as the ball dropped.

The former England striker had forgotten he was on 299 club goals before the game but he admitted it was special to be reminded of his feat as he watched the impressive goal back.

Defoe said: “Before the game I actually forgot, which to be honest was a good thing because if I had been thinking about it during the game maybe that goal wouldn’t have come, maybe I would have snatched at the chance.

Defoe, who netted his first goal more than 20 years ago for West Ham against Walsall, revealed the move was pre-planned.

“I spoke to Tav,” he said. “When he gets the ball, if I can disguise my run like I am coming short and then spin in behind, I know he has that range of passing.

“As it came over my shoulder I just felt like I had to hit it first time. I obviously stayed relaxed with the finish. When I watched it back, it was a good one.”

The win sent Rangers six points clear at the top of the Scottish Premiership after Celtic, who have a game in hand, were held to a 3-3 draw by Aberdeen hours earlier.

Rangers looked determined to build on last weekend’s victory at Celtic Park and goals from Joe Aribo and Defoe had them two ahead inside 16 minutes, although they lost much of their verve after half-time.

However, Defoe insisted they were not paying much attention to the league table.

“To be honest, personally I have not really been looking at it,” he said.

“It’s important we just focus on ourselves, take each game as it comes, keep working hard, keep believing that we can improve. Even games we have won, still believe we can improve.

“Training is always good, every week everyone is trying to impress the manager. Everyone wants to get in the team, which is always important.

“Just focus on ourselves, we can’t take our foot off the gas, just keep going.”