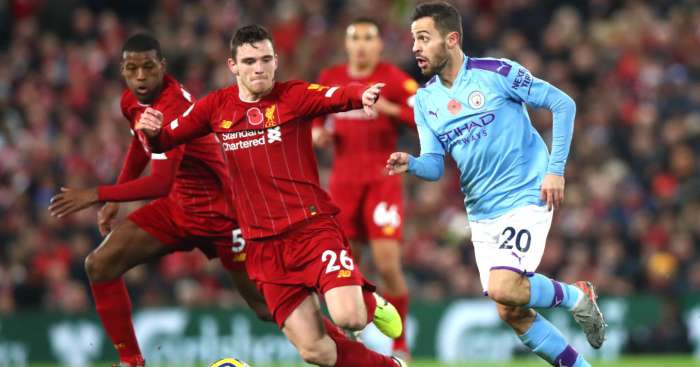 Scotland international Andrew Robertson admits that he hasn’t trained with Liverpool “at all” for two and a half weeks.

The left-back has had to pull out of Scotland’s Euro 2020 double header this month after aggravating an ankle injury in Liverpool’s 3-1 victory over Manchester City on Sunday.

That has given Liverpool an incredible chance of winning their first top division title for 30 years and Robertson doesn’t want to jeopardise his place in the team by making his injury worse on Scotland duty.

“It’s a big disappointment for me,” Robertson said in quotes via the Daily Record.

“I don’t care what game it is, I want to play it and my track record in the last five years has shown that. But I don’t want to pick up more injuries and ruin my season because of it.

“The games in March (play-offs for the finals) are so big for us and will decide whether we go to a major tournament or not so we all have to be fully fit and fully firing and hopefully confident after these two results.”

Robertson added: “The call has been made and it has been taken out of my hands. It hurts as captain to miss out but I’ve had to be selfish for the first time in my career and let my body rest.

“I’ve had to listen to the people around me when previously I would have told them to beat it. The fact my ankle has swollen up again has made it easier to miss these games.

“For the last two and a half weeks I’ve not trained at all for Liverpool. I’ve trained the day before a game, missed a Champions League game other than the last 15 minutes against Genk and missed Arsenal in the League Cup.”