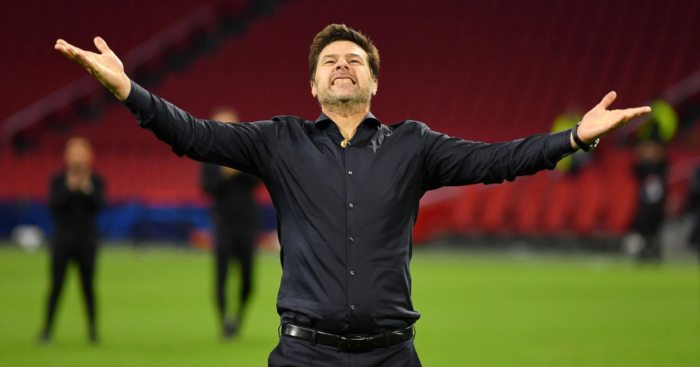 Tottenham manager Mauricio Pochettino has made it clear he will walk away from the club in the summer if he is expected to keep delivering success with the same tools currently at his disposal.

The Spurs boss, who has guided the club to a first-ever Champions League final, has said he would be open to taking a sabbatical from the game and that he would be the “most stupid person” to stay under the current way of operating if his brief was to repeat their recent achievements.

It comes just days after Pochettino said he could look to “do something different” if he can deliver Champions League glory for Spurs in Madrid next month.

The Argentinian has turned the club into an established top-four outfit, but has done it without any significant transfer net spend and was forced to watch them go through the last two transfer windows without signing anyone.

Pochettino, who has four years left on his current contract, says that this summer – with their recent move into their new stadium – marks the end of a five-year chapter and he is set for talks with chairman Daniel Levy about the future.

Those talks could now be make-or-break as to whether Pochettino is still at the club next season.

“I am not open to start a new chapter with no plan, with no clear idea, with not being transparent, telling you and telling our fans what next, what is our objective,” he said.

“I know very well how this business works. And we know very well that we need to operate in a different way – that doesn’t mean to spend more or less money.

“But if we expect every season to be in the final of the Champions League because it is our plan, we need to create a plan. And the plan maybe is different to what has happened in the last five years.

“If not, I see the people working in the same way, in the future I’m going to be this guy. I am the most stupid person to work.”

With four years left on his contract and chairman Levy unlikely to welcome any approaches from other clubs, Pochettino would have to quit if he wanted out.

Asked directly if he would take a sabbatical, he replied: “I am open like I said before. I am open to everything.

“Of course I love to work, I love Tottenham, I love to be here every day, I enjoy it a lot, I am so grateful but after five years, I think our effort was massive.

“Of course my motivation is to be here and to work hard, to try to achieve all that the club want to achieve.

“But the problem is I need to know what we need to achieve or for what we are going to fight and then who is going to assess the tools that we have to achieve what we plan to achieve.

“That is the most important.

“Because in the five years we have achieved a lot of things and I think like I explained before, it was an amazing period. But now it’s what’s next, that is my point.

“And I think of course we are all excited now and it’s difficult to see the future but the future arrive quick.