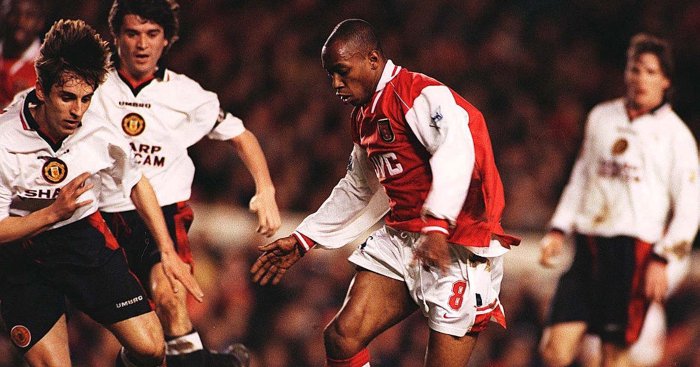 Ian Wright has revealed how he punched Steve Bruce in the Old Trafford tunnel at full-time in a clash between Man Utd and Arsenal.

The Gunners and United were going head-to-head for Premier League titles during the 1990s and Wright enjoyed some great battles with Bruce and a number of other Arsenal players.

And Wright explained how one incident with Man Utd legend Bruce unfolded, leading to the former Arsenal striker punching his compatriot in the tunnel.

Wright said on Match of the Day: “We were at Old Trafford and I always used to try and run off Brucey. To be honest, Brucey always used to play me pretty well and he always got me booked so I had to be a little bit calmer.

“I remember there was one particular incident. So the tunnel is down that end (Wright points to the far end of the pitch) at United and we know it’s down there.

“And I went like that (Wright smiled and gestured) ‘ahh right, yeah, f**k off’. So then the whistle goes and Brucey runs past me and he does that to my shoulder (Wright acts out a shoulder barge) and I’ve gone bang. And he’s like ‘see you in the tunnel’ and I went ‘oh f**king hell’. I said ‘oh sh*t, Brucey’s going to get me’.

“And so the problem I had is that Tony Adams and Bouldy (Steve Bould) are too close to the end so I don’t any back-up, so the biggest guys have gone in.

“So I tried to run down really quick but when I got in the tunnel Brucey was waiting for me, fists clenched. ‘Right that’s it you, I’ve had enough of you’. I played possum, I said ‘woah, woah Brucey. What’s happening, man? Listen, come on Brucey, you know how it is’.

“But all the time I was talking – because you know how you have to get closer – he said ‘I’ve had enough of you and your sh*t.’

“And what happened was I got really close and as I got closer I thought ‘I’m in arm’s shot here’. He put his arms down and said ‘I’ve had enough you” and I went bang (Wright acted out a punch) right in his face.

” And then I ran off and then it all kicked off. Afterwards I went straight on the coach.”