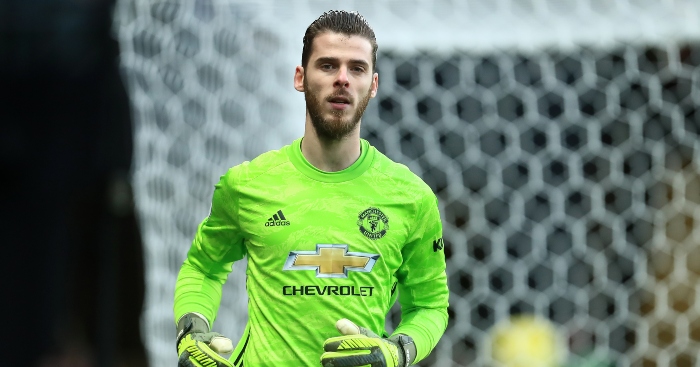 Ian Wright claims a change in goalkeeping coach may be to blame for David De Gea’s drop in form at Manchester United.

De Gea has made a number of errors this campaign and gifted Everton a goal as United drew 1-1 at Goodison Park on Sunday.

The keeper’s clearance was charged down by Dominic Calvert-Lewin with the ball rebounding into De Gea’s net.

Richard Hartis replaced Emilio Alvarez as goalkeeping coach in September having previously worked with the academy at Old Trafford.

And Wright believes his relationship with De Gea will not be as good as required just yet.

“[The relationship is] massive, honestly the relationship with David Seaman and Bob Wilson [at Arsenal], it was almost telepathic in what they were doing, they were so tight all of them, everybody that was involved,” Wright said on Match of the Day 2.

“The goalkeepers, you need that guy. That guy is like your confidante, he’s everything.

“So if you lose somebody that important, that integral to what you’re doing, that’s going to have some effect on you so I’ll give [De Gea] that absolutely.

“But still there’s no excuse for the first goal.”

Despite the blunder against Everton, Ole Gunnar Solskjaer still rates De Gea as the best goalkeeper in the world.

He said: “We want a squad full of quality and with competition and if you want to survive at the top you need to bounce off competitions from right, left and centre.

“He went through a difficult patch last season, definitely, but David’s been very, very good this season.

“I can’t really remember any errors I’d go to now, apart from Watford one (Ismaila Sarr’s goal). I trust David 100 per cent in the goal.

“David’s shown his reaction, the way he made amends and saved Sigurdsson’s goal, or chance, at the end. David’s the best goalkeeper in the world.”