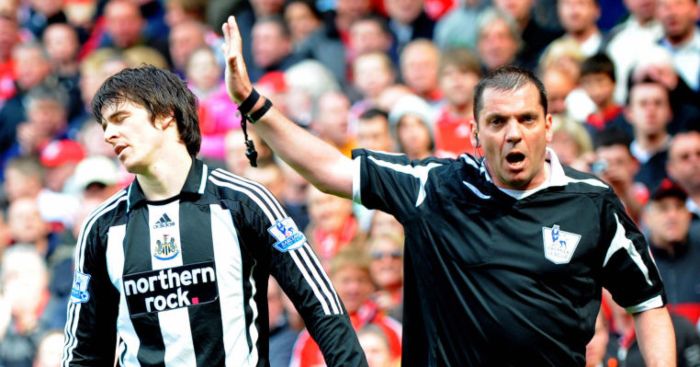 Shearer took charge of his beloved Magpies for the final eight fixtures of the 2008/09 season, failing to steer them clear of relegation to the Championship.

Newcastle won just one of those games, beating Middlesbrough at home, but lost five others.

Those defeats included a 3-0 loss to Liverpool at Anfield, during which Barton was sent off after 77 minutes in his only appearance under Shearer.

“I only had him for an hour of the eight games,” the former striker told BBC’s Match of the Day podcast.

“You can laugh about it now. I wasn’t laughing at the time at Anfield when he got that red card.

“I had him, he was injured for the first four games and then he was fit, so we decided to play him at Anfield. We were getting beating 3-0, it could have been six or seven because Liverpool hit the woodwork three times, I think.

“We were just about to take him off and then he does that tackle on Xabi Alonso in front of the Kop. Straight red card and that was it, I never saw him again.”

Wright, barely breathing due to the laughter, added: “Al, I was gonna say: you know Joey Barton, being injured like he was, it being against Liverpool, you know, going back, I wouldn’t have played him at all. I wouldn’t.”

Asked whether he considered leaving Barton out, Shearer then replied: “Yeah, absolutely.

“He’d been injured for the first four games, and we were struggling a bit in midfield, we didn’t have legs in the midfield, so that was one area where we thought he would improve.

“So we just thought we’d see how training went in the week. I spoke to him, ‘You know you’re going to get criticised going back to Anfield.’

“He said, ‘Yeah, no problem’. There was a bit of a row in the dressing room [after the game].”