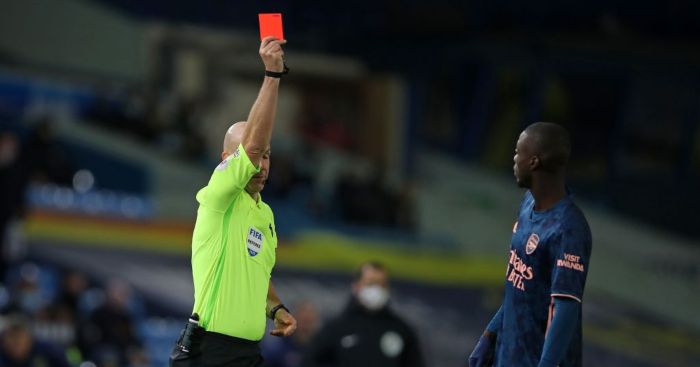 Arsenal legend Ian Wright has criticised Nicolas Pepe for his “totally unprofessional” behaviour in the Gunners’ 0-0 draw against Leeds United on Sunday.

Pepe appeared to headbutt Leeds defender Ezgjan Alioski in an off-the-ball incident and was given a straight red card in the 51st minute of Sunday’s Premier League clash after referee Anthony Taylor viewed the altercation on a pitchside monitor.

Arsenal had been outclassed up to that point but resolutely held on for the rest of the match to claim a share of the spoils – although Mikel Arteta was still visibly annoyed at how Pepe had left his team-mates in the lurch.

And Wright reckons Pepe “let everybody down” and thinks the Ivory Coast international “needs better advice around him”.

“I’m not saying that it’s a proper full-on headbutt but you can’t do that to people in this day and age,” Wright told Premier League Productions.

“You can’t get into people’s face like that. Alioski has gone down like he’s really got a proper headbutt but at the same time that’s just totally unprofessional and just poor from him.

“He’s someone that we have a lot of faith in and he seems to me that he’s not getting better, he’s actually getting more in himself and more frustrated, where you want to see him improving. He needs better advice around him.”