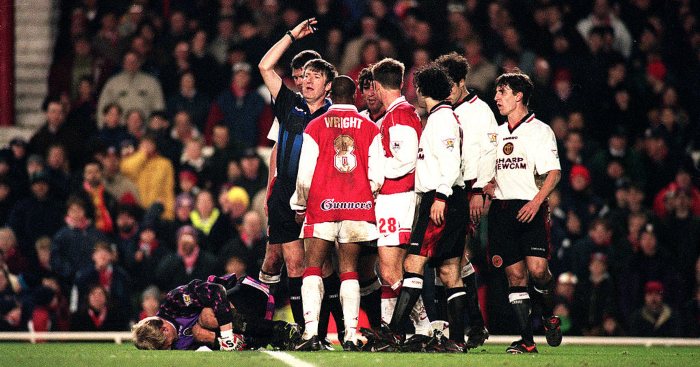 The Gunners and United were going head-to-head for Premier League titles during the 1990s and Wright enjoyed some great battles with Schmeichel over the decade.

“We get on well, play golf together and laugh about the collisions we had,” Wright told the Match of the Day podcast when asked about his rivalry with Schmeichel.

“When we speak about it now, me and Schmeichel, we talk about how much I genuinely hated him as a goalkeeper. I knew how good he was and how hard it was to score against him. The only goals I ever scored against him were in friendlies!”

A match between Man Utd and Arsenal at Highbury in 2007 saw their rivalry reach a new low as Wright jumped into a challenge on Schmeichel with two feet.

On the incident, Wright added: “We’d had a bit of an altercation at Old Trafford which led to this game which was a couple of months later.

“The tackle which everybody sees, the whistle had already gone and I just didn’t stop.

“We’re both running for the ball, the red mist was there and I just jumped on the ball with two feet – they said it was the tackle that shamed football. When I look back at it now, it’s quite an embarrassing thing to see.”