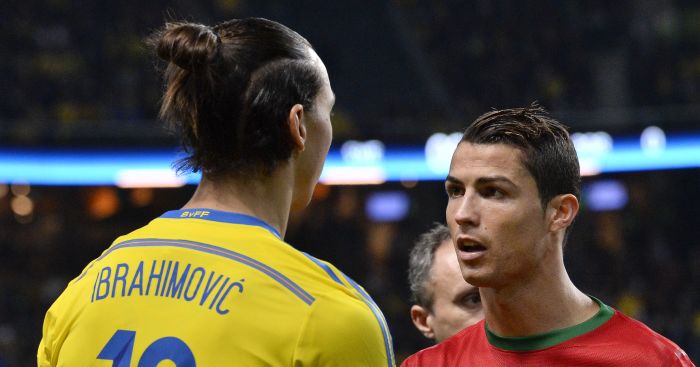 Zlatan Ibrahimovic has joked that Cristiano Ronaldo should try an overhead kick from further out after scoring a unbelievable goal in Real Madrid’s 3-0 victory over Juventus on Tuesday night.

Ronaldo bagged two goals on the night as Real put one foot in the Champions League semi-finals, but his second was something special.

Dani Carvajal lifted a cross into the box towards the Portugal international, who rose in the air to produce a breathtaking acrobatic kick that flew past a helpess Gianluigi Buffon.

However, Ibrahimovic hinted that his recent 40-yard strike on his debut for LA Galaxy was better than Ronaldo’s effort.

“It was a nice goal, but he should try it from 40 meters,” Ibrahimovic told ESPN Sportscenter on Tuesday night.

The Swede scored two goals on his debut for Galaxy as he helped them overcome a 3-0 deficit to beat LAFC 4-3.

“I mean I’m still jetlagged,” Ibrahimovic added. “I’ve been here for four days, trying to pass the days with energy as much as possible but it hasn’t been easy.