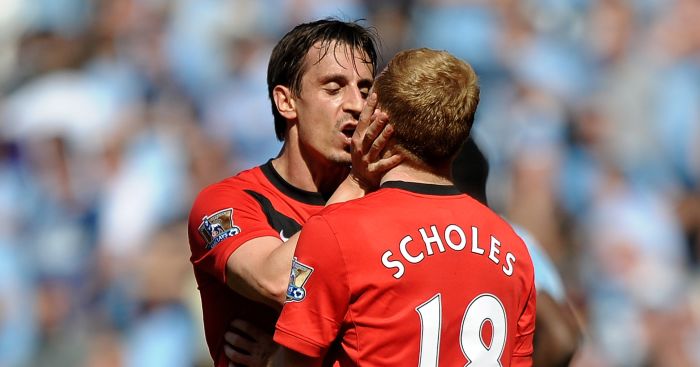 Zlatan Ibrahimovic has taken aim at Manchester United’s Class of ’92 – or “the circle of Ferguson”.

Gary Neville, Phil Neville, Paul Scholes and Ryan Giggs were among the players to emerge from United’s youth system and break into the first team under Alex Ferguson.

They formed a key part of the Scot’s early dominance of the Premier League, and the majority of them have since moved into punditry at some point after retirement.

Scholes has been a particular critic of United’s post-Ferguson managers, railing against both Louis van Gaal and Jose Mourinho.

Ibrahimovic feels that the club legends are “complaining all the time” rather than trying to help.

“They are not there any more,” he told the Daily Mirror.

“They are on TV and complaining all the time because they are not active in the club.

“So you cannot be on TV and always complaining and criticising. Yeah, OK, you’ve had your time, we know it.”

Ibrahimovic used the example of Pogba, a regular victim of what he calls “the circle of Ferguson”, to prove his point.

“With Pogba, he was with United when he was young, then he went out and he came back,” said the Swede.

“And in the circle of Ferguson, they don’t like that. Because they stayed all their life under Ferguson and they never moved from Ferguson.

“And they didn’t even talk if Ferguson didn’t tell them to open their mouth.

“So now if they are talking, I don’t know whether Ferguson gave them permission or not.”