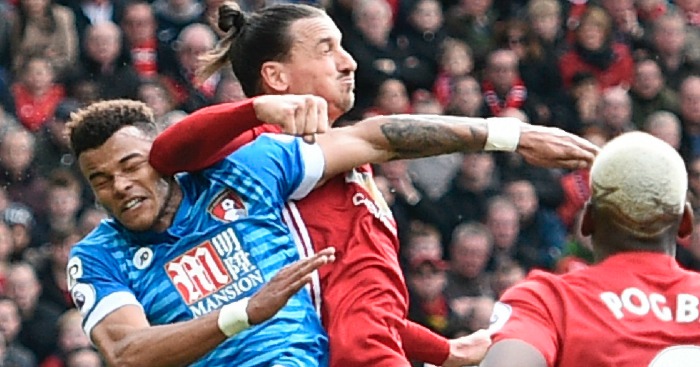 Zlatan Ibrahimovic will serve a three-match ban after admitting the charge of violent conduct against Tyrone Mings.

A statement released by the Football Association confirmed that Ibrahimovic and Manchester United not contested the charge.

Ibrahimovic claimed after the game that Mings had jumped into his elbow, but it was never considered likely that United would contest.

The striker will now miss the FA Cup tie at Chelsea alongside league games against West Brom and Middlesbrough.

‘Zlatan Ibrahimovic will serve a three-match suspension with immediate effect after he admitted an FA charge of violent conduct and accepted the standard penalty.

‘It follows an incident in or around the 44th minute of the game between Manchester United and AFC Bournemouth on Saturday (4 March 2017).

‘The misconduct was not seen by the match officials at the time but caught on video.’

Interesting that the officials said that they didn’t see the incident. Just what were they talking about for three minutes?