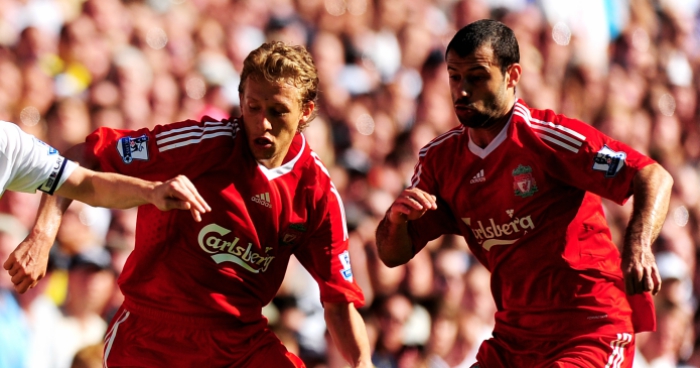 Lucas Leiva admits that he would likely have left Liverpool in 2010 had Javier Mascherano stayed.

The Brazilian is currently the club’s longest-serving player, having joined in 2007 under Rafael Benitez.

The 30-year-old has regularly been linked with a move away, but he has survived the reigns of Benitez, Roy Hodgson, Kenny Dalglish and Brendan Rodgers, and remains a key member of Jurgen Klopp’s squad.

He almost joined Inter Milan in the winter, but it was not the first time he came close to leaving Anfield.

“Many times I had chances to leave,” he told The Anfield Wrap. “Sometimes the club didn’t want me to leave, sometimes I didn’t want to go, but I always felt that there is something missing still.

“I thought if I leave like that it’s not the way I wish.”

The closest the Brazilian came to leaving was in 2010, when Roy Hodgson was appointed manager.

“Always when a new manager comes in you doubt your future, you’re not sure,” he added. “He comes in and brings his players. We had a lot of talk of Mascherano leaving.

“All the big players, Mascherano, [Fernando] Torres, wasn’t really happy, you could see in his [Torres] body language, we had a lot of problems off the field, with the owners. So I think everything started to affect us.

“And then of course for me it was really hard because I didn’t know [my future] until Mascherano left. I knew that if Mascherano had stayed I probably would have to leave because there was no space for me. So he left and then I had to stay. [But] it was like if he goes ‘you stay’, if he stays, ‘you go’.”