Home Johnny Nic If Leicester can do it, then so can we… 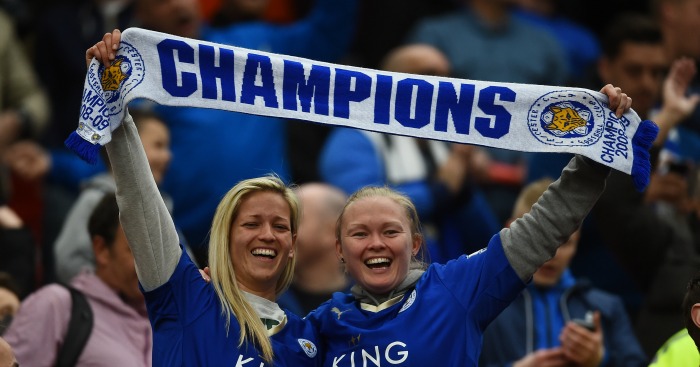 It’s as obvious as the balls on a tall dog that Leicester are going to win the league against everyone’s, probably including their own, expectations. To me, it’s the most wonderful thing I have witnessed in my 50 years of watching football, for all of the reasons much discussed in recent weeks, the most important of which is it how it shows other clubs what can be achieved on a relatively modest budget.

You have to wonder why on earth Nigel Pearson had them in the relegation places for so long. Never mind all these ex-player pundits endlessly wittering on about him getting some credit for Claudio Ranieri’s success; he deserves a healthy dose of criticism for holding back a team that had this degree of great in them.

I hope the next days or weeks, as they work towards their triumph, can be a time we all cherish and enjoy in an unaffected way. Stories of opposition fans applauding Leicester fans are wonderful and hint at an underlying feeling that this isn’t just a brilliantly exciting, unexpected event, but also a well-deserved victory over Big Money, over an unfair football economy, over a whole raft of values, both moral and economic, that we dislike in life and football. Massive financial doping of the ‘top’ clubs has left many of us feeling hollow and actually quite bitter about modern football. There are few who don’t feel its soul has been cheapened, if not destroyed, by the elite, money-laden people who own and run clubs.

These things are all relative but Leicester’s £30m team is super cheap in today’s football world, so it feels like Something Good is happening, that Big Money is losing, for once. And man, that feels very good, because Big Money has made football predictable. It crushed everyone else’s ambition under the wheels of its vulgar, solid gold Bentley. It said you could only compete if you threw billions at it and it made everyone inside and outside the game believe that was the new truth. It turned the people’s game into the elite’s game, all about big numbers rather than big soul.

So it’s a bit depressing to hear how many people assume that next year, the big clubs will get out their huge chequebooks and somehow bully upstarts like Leicester and others with their financial muscle. We need to break out of this mindset. We need to break the stranglehold it’s held us in.

Some fans have been inculcated into a mindset of always wanting big transfer fees paid for famous players, but that intrinsically buys into the soulless and commodified view of football, where you merely buy the best to be the best, and the one who spends most, wins. In this world view, a £25million player is better than a £10million player. In this world view, spending £50million on a transfer represent “ambition” but buying someone for five million shows “lack of ambition”.

Leicester have illustrated the folly of that assumption. They have found a different way. They have exposed Big Money as a status quo which may no longer have any status.

The days of buying your way to success may be over. A restoration of a supposed norm is the easiest of assumptions to make, indeed, those with the power and money have brainwashed us into thinking their model is the only model and will quickly reassert itself, but things do change, and castles made of sand fall in the sea, eventually.

Whatever age you are, I guarantee you this: the 2015-2016 season is a season you will never forget. We are living through a moment that will still astonish in 50 or 100 years’ time. As it comes to pass, now is the moment to embrace it, enjoy it and be inspired by it, so that whenever it looks like the odds are against you, whenever it looks hard to achieve something, whenever we take on people with more money and power, we can tell ourselves, if Leicester can do it, we can do it. And that is priceless.