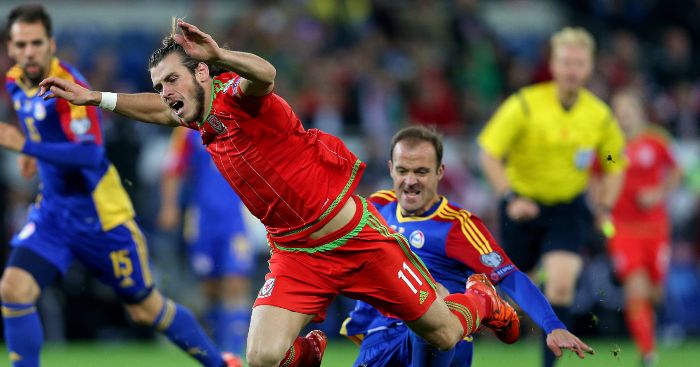 In June 1997, at the age of 17, Ildefons Lima made his international debut in a 4-1 defeat to Estonia. It was Andorra’s second recognised match, having joined FIFA and UEFA the previous year. Lima is their captain, record goalscorer and record appearance maker, surpassing Oscar Sonejee’s all-time caps record in 2017, when he played a friendly against Qatar in the unlikely location of Burton-on-Trent. He has played in 71 percent of the country’s matches.

Abridged version: Lima is the Andorran national team and they are him.

Being born male and Andorran is to receive a VIP pass to international football. The country’s population is a shade over 76,000, roughly the same as Bracknell. The national league is formed of eight teams, supplemented by FC Andorra who participate in the Spanish third tier. Lima has played more games for FC Andorra than any other club.

For those fortunate to reach the front of a short queue, playing for a microstate can be a curse as well as a blessing. Andorra have won six matches in their history and grown accustomed to heavy defeats that provoke quasi-philosophical debates about the pointlessness of participation without competitiveness. The UEFA Nations League has provided lifeblood to them and other national teams. Over the last two years, Andorra have drawn with Latvia (twice), Georgia and Malta.

Lima’s longevity stands on the edge of record-equalling greatness. Only one player in the game’s history (Finland’s Jari Litmanen) has played international football across four decades. But with a dearth of other options and Lima still playing regular domestic football for Inter Club d’Escaldes in Andorra’s Primera Divisió, Litmanen’s apparently unmatchable feat loomed into view. Media stories in Andorra and Spain prepared to celebrate the milestone.

That’s where the story begins to sour.

When Koldo Alvarez, Andorra’s national-team coach, selected his squad for September’s Nations League games, Lima’s omission was the headline news. The Andorran football federation (FAF) released a statement explaining that Lima was left out for ‘non-sporting reasons’. After the fixture against Latvia, Alvarez revealed a conflict between Lima and the FAF.

Ildefons Lima would've become only the second player (after Jari Litmanen) to play international football across four decades, but has been suspended by the Andorran FA as he wanted Covid tests for players. https://t.co/SR1hXvcQD0 Campaign to reinstate him for November matches?

A month later, the feud has escalated. It became clear that Lima was omitted for criticising the health protocols of the FAF, who had failed to provide Covid-19 tests for national-team players ahead of training sessions. The FAF responded in turn, standing by their initial disciplining of their captain:

‘The board stands by its decision to temporarily exclude you from the national team, owing to your responsibilities as president of the Players’ Association, which has issued numerous baseless and inaccurate criticisms of the FAF’.

The FAF have effectively refused to pick Lima because he is head of the Andorran Players’ Association, believing him integral in the criticism of their health protocols that the Players’ Association is putting the lives and careers of their members at risk. For his part, Lima believes that a de facto international ban without disciplinary procedure or tribunal is an act of dictatorship.

“I thought that only happened in North Korea,” he told Spanish newspaper Marca.

And so a stalemate has been reached. Lima will not be called up until he relinquishes his role as a representative of the players or offers a formal apology for criticising the lack of Covid-19 tests; Lima refuses to apologise. To do so would be to let down the promises he made to his peers as part of his appointment in his role. He is now threatening legal action against the FAF for their conduct. He claims that his teammates are living in fear of a future in which they will be banned from free speech and criticism.

Lima’s plan was to retire from international football during the World Cup 2022 qualification campaign, enjoying his deserved walk into the glorious Andorra la Vella sunset. He would have matched Litmanen’s achievement and extended his verified Guinness World Record for the longest international football career in the game’s history.

He may still. Lima remains determined to clear his name and earn his rightful happy ending. But it will come after an ugly protracted fight that has plunged Andorran football into ignominy, its most famous player into the shadows and its football association into alleged disrepute.