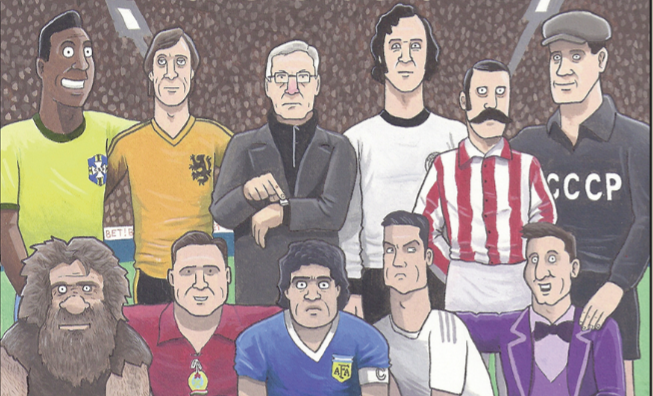 The following is an extract from David Squires’ excellent new book ‘The Illustrated History of Football’. You really will want to buy it…

The streets and villages of Britain bore witness to riotous scenes as unruly football matches weaved their destructive path. Numerous monarchs suppressed the game throughout the ages (although Henry VIII did own a pair of football boots). Pottery stalls were overturned, parsnips trampled; the rough game was unpopular with local business owners and heightened the enduring British fear of crimes against property. Just imagine what a rampant pack of muddy serfs crashing through your hamlet would have done for hut prices.

As Britain moved into the nineteenth century, the authorities were also anxious about any congregation of large, violent mobs, given the popular uprisings occurring elsewhere in Europe. What if the players lost their ball in a particularly brambly hedgerow; would their aggression be redirected towards their landowning oppressors?

Eventually the increased urbanisation of an industrialising Britain put pay to this form of the game. Kids turned their backs on the game, preferring to stay indoors, playing with their lethal cotton-spinning machinery and chimneys.

However, football was to be revived through the more refined environs of private schools, famously never an incubator for brutality. It was believed that the playing of games prepared the ruling classes for the wider world, helping them to build character and develop into gentlemen – crucial qualities for any man of breeding to possess when embarking upon an imperial war against poorly armed foreign infidels. Huzzah!

The Illustrated History of Football by David Squires was published on November 3, Century, Hardback, £12.99.