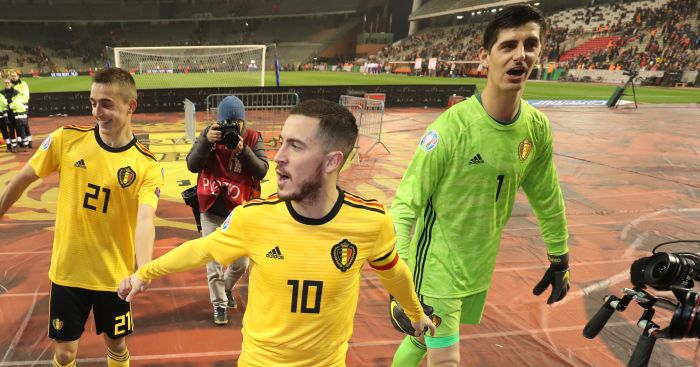 Thibaut Courtois thinks the Spanish press want “to kill” him and has hit back at his critics after making a mistake in Belgium’s victory over Russia.

Belgium made a winning start in Group I, defeating Russia 3-1 despite a bad error by Courtois.

The Real Madrid goalkeeper was dropped by Zinedine Zidane for his first match back in charge at the Bernabeu and his club manager would certainly not have been impressed by the dreadful pass that allowed Denis Cheryshev to score in the 16th minute.

Belgium had taken the lead two minutes earlier through on-loan Leicester midfielder Youri Tielemans but Courtois’ error ultimately did not cost them, with Eden Hazard scoring from the penalty spot just before half-time and then grabbing the third two minutes from time.

“I still consider myself one of the best goalkeepers, even though the Spanish press wants to kill me,” Courtois told reporters.

“I feel very strong, I’m calm because I train well and play well.”

On the mistake, he continued: “[Artem] Dzyuba nudges me and I ran out of strength to clear the ball.

“It was a little mistake, but that’s the goalkeeper’s life. Despite that, afterwards I kept calm and played my game.”

Meanwhile, Hazard joked about Courtois’ error, he said: “Thibaut watches a lot of videos of my actions and then he tries to copy me. The problem is: he is much taller than me, so it isn’t that easy!”