Home Uncategorized Impossible job? Five managers who began on the back foot… 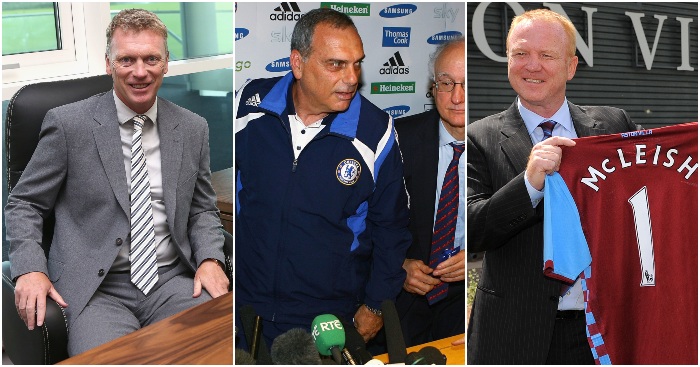 Roy Hodgson (Liverpool)
There is already a Premier League precedent for following Rafa. At Liverpool, Hodgson took over a giant of a club crumbling behind the scenes and a team in disrepair which relied on Benitez to paper over its cracks. Sound familiar, Brucey?

Hodgson was appointed by Tom Hicks and George Gillett, owners arguably worse than Mike Ashley since Liverpool almost went out of business under the Americans’ stewardship. Liverpool fans wanted Kenny Dalglish instead and the Anfield icon was certainly interested in a return to the hot seat. But the Reds’ brains trust opted for Fulham boss Hodgson, whose Fulham side had just reached the Europa League final only to be beaten by Atletico – Liverpool’s conquerors in the semis.

The yet-to-be-discovered financial dire straits presumably contributed to a bizarre summer of recruitment. Deals to sign Milan Jovanovic, Jonjo Shelvey and Danny Wilson pre-dated Hodgson’s arrival but the new boss couldn’t shy away from the signings of Joe Cole – which everyone thought at the time was good business – Christian Poulsen, Brad Jones and Paul Konchesky. He also offered a new deal to Fabio Aurelio who had been released only weeks previously. Of the eight new arrivals, only Raul Meireles proved to be of any use.

Mercifully, FSG saved the club soon after but the team still required rescuing as they flailed in 19th place after one win in their opening eight league games which featured a home loss to Blackpool and defeats at Manchester United and Everton. Hodgson also watched his side lose at home on penalties to League Two strugglers Northampton.

Hodgson rarely helped himself in interviews, and though he couldn’t fail to notice the dissent from the stands, more often than not, the manager’s comments only served to rile the Kop further. “The famous Anfield support has not really been there ever since I came here,” he said in the strongest hint yet that he had given up. A week or so later, Hodgson was gone and the Kop belatedly got its way with the return of King Kenny.

Joe Kinnear (Newcastle)
Rafa, Alan Shearer and Kevin Keegan aside, most of Ashley’s Newcastle managers have been greeted with suspicion. In replacing a Toon Army hero, Steve Bruce would be well advised not to take a leaf out of Kinnear’s sweary book.

Kinnear was the second of four managers to take the Toon reins in 2008-09 and, crucially, the man who replaced Keegan. But rather than offer a smidgen of humility to sceptical fans and journalists, the 61-year-old, who had been out of work for almost four years and hadn’t managed in the Premier League in the 21st century, came out fighting. Almost literally.

“Which one’s Simon Bird?” Kinnear asked before even sitting down to begin his first press conference. “You’re a c*nt.”

That set the tone for one of the Premier League’s greatest press conferences and a five-month reign which got no less weird. Results weren’t all that bad with Newcastle in 13th place when it was announced in February that Kinnear would have to undergo a heart bypass operation. But the Magpies plummeted into the Championship on the watches of Chris Hughton and Shearer.

“I have no doubt that he will bring an energy and commitment to deliver winning football that is part of the fabric of this club,” said United’s newly-appointed chief executive. “In this respect, he is cut from the same cloth as the Old Trafford greats who go before him. I have been very impressed by David’s personal and managerial traits, which reflect the Manchester United values. I have no doubt that he will embrace, and soon become an integral part of, United’s unique culture and heritage.”

Bang on, that. To be fair, Woodward wasn’t the only one to lump on the wrong horse. Sir Bobby Charlton was delighted because he “always said that we wanted the next manager to be a genuine Manchester United man” while Ferguson himself nominated his own successor.

Some United fans tried to jump aboard the Moyes train with ‘The Chosen One’ banner being hung from Stretford End, but many reserved judgment on the former Preston and Everton manager who previously had never won a pot.

It wasn’t long before verdicts were handed down. Before the end of September, Moyes was scrapping for his job, one that he had demonstrated few credentials for despite it being given to him for six years. He complained furiously about having to face Swansea, Chelsea, Liverpool, Crystal Palace and Manchester City in his first five games but losing his sixth at home to West Brom was as damaging as the previous week’s 4-1 derby humiliation. Then came the draw of 81 crosses, 3-0 home defeats to Liverpool and City, talk of the champions ‘aspiring’ to be City and the, the fly-over which began one of football’s worst trends.

Moyes was dismissed in April after the third-shortest managerial stint in 82 years with United seventh, 13 points behind fourth-placed Arsenal and on course to finish outside the top three since the Premier League began.

David Moyes: "I’m hungry to win trophies and driven to do it." #mufc pic.twitter.com/yg5UzXYzBu

That was the message daubed on the walls at Bodymoor Heath before McLeish had even set foot in the place while supporters also turned up at Villa Park to protest against the Birmingham manager’s proposed defection from Birmingham City to Villa.

One candidate to replace McLeish at Birmingham, former Blues midfielder Alan Curbishley, tried to warn the Scot what might be to come: “When Ron Saunders went from Villa to Birmingham there was uproar. I can understand the furore that is going to happen if Alex McLeish goes to Villa.

“I think people outside of the city of Birmingham don’t understand the rivalry between the two clubs. It is massive. Perhaps Alex, if he does go to Villa, has not thought that bit out and it is a big situation he is going into. If it does happen, there will be some tricky times ahead.”

Indeed there were, but Randy Lerner dragged McLeish and Villa’s agony out for the entirety of the 2011-12 season. They finished just above the drop zone, winning just four home matches amid cries from the Holte End of “f*ck off McLeish, the Villa is ours” and “sack McLeish, my lord”.

“Compelling play and results that instil a sense of confidence that Villa is on the right track have been plainly absent,” admitted Lerner. “The most immediate action that we can take is to look carefully at our options in terms of bringing in a new manager who sees the club’s potential and embraces our collective expectations.”

So who did he appoint? Paul Lambert.

Avram Grant (Chelsea)
Chelsea fans would have viewed sceptically anyone who was chosen to replace their Special One, Jose Mourinho, in 2007. But the absence of credentials and personality – in front of the cameras and in contrast to Mourinho – didn’t help Grant’s cause.

Those aside from Roman Abramovich struggled to grasp what the oligarch had seen in the Israeli to thrust him into a position he appeared barely qualified for. He arrived at Chelsea as director of football after a stint as Portsmouth’s director of football. When he left both posts, neither club bothered to replace him.

Grant returned to Pompey upon being shown the door by Chelsea but he was appointed as manager shortly after Paul Hart’s sacking. That was just one of the patterns which emerged from Grant’s career. Another being relegation.

Pompey dropped into the Championship though their financial plight offered Grant some mitigation. Indeed, West Ham took a punt on the then-55-year-old, with David Sullivan proclaiming: “We are certain we have got the right man.”

Wrong again. Seven wins from 37 (Grant missed the Hammers’ first win of the season after overseeing their worst ever Premier League start) saw Grant take a second club in successive seasons down to the Championship. Somehow, he mustered the front to put himself forward for the Newcastle job.