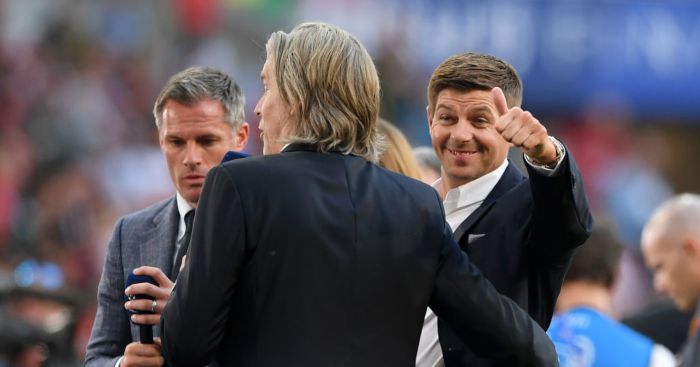 Steven Gerrard has vowed to continue demanding more of his Rangers squad after watching them thrash Marseille 4-0 at Ibrox.

Daniel Candeias returned to the Light Blues line-up after being left out of the squad for Tuesday’s Europa League win over St Joseph’s to hit a stunning first-half double against the French giants.

Connor Goldson and Jermain Defoe completed the rout after the break to leave Gerrard delighted with how his team is shaping up after their latest friendly success.

Gerrard insists, however, there will be no let up as he continues to drive up Gers’ standards.

The former Liverpool skipper told RangersTV: “I was very impressed. I thought it was an outstanding performance from a team point of view and obviously, across the board, there were a lot of very strong performances.

“It was a good test for us at the right time, and we are hoping more, high-quality opposition like that are going to roll into Ibrox if we go on a European run.

“It is pleasing for the fans to see the evidence out there on the pitch of the standards we are trying to drive.

Gerrard believes his players have responded to the changes he has made.

“We are representing Rangers, and the standards here for many, many years have been top, top drawer,” added Gerrard.

“For us to be successful and achieve things together, it is important I keep pushing alongside my staff to keep that hunger and that consistency among the lads.

“We believe the quality is in the dressing room and now it is over to them. We’ll keep pushing them.

“For me, the important thing watching Rangers from afar, before I came in, was that I didn’t see that hunger and that intensity out of possession.

“We are hunting the ball back in packs, who will defend the colours with their lives, and we have got players who are prepared to do that now.”