Home Mediawatch In what world is Eric Dier better than Lucas Torreira? 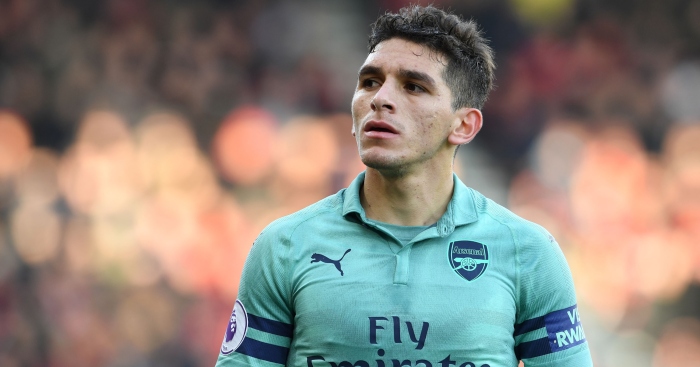 Tottenham >>>>>>> Arsenal
Combined XIs are ridiculous. Utterly ridiculous. They are especially ridiculous when you ask renowned banter merchants Paul Merson and Tim Sherwood to name a Combined XI for Tottenham and Arsenal, who are separated by a grand total of three points in the Premier League. You may also notice that Arsenal have scored five more goals than their north London rivals and are now unbeaten in 18 games. And yet are apparently still a pile of absolute shite.

He does of course include Harry Winks, who is probably not even in Tottenham’s first-choice XI, never mind a Combined XI where the opposition is the remarkably good Lucas Torreira.

Merson is a little more circumspect with his selection and does actually include Aubameyang and Mesut Ozil. Again, no sign of Torreira as Merson decides that Eric Dier is the better player. So just 9-2 in favour of those far superior Tottenham chaps who are bizarrely just three points ahead of Arsenal.

It’s at this point that we turn to Merson’s predictions on the Sky Sports website. Presumably, a tonking is in order.

Sherwood forest
“It would be a major shock to me if Arsenal won this game, even though they are at home. I can’t see how they can be favourites! When you look at the actual line-ups on paper, how can Arsenal ever be favourites to win this game? I know they’ve improved but at the moment they are quite a way off where Tottenham are.”

1) Arsenal are just three points behind Tottenham. That is not “quite a way off”.

2) Arsenal are unbeaten in their last ten home games.

3) The last time this fixture was played – with very similar line-ups – it ended 2-0 to Arsenal.

And that’s why Arsenal are (marginal) favourites. Still baffled?

Mangle it in the Daily Express website machine and what do you get?

You almost have to stand and applaud.

Now the ‘could’ has already set a few alarm bells ringing; it does not scream ‘inside information’. For example…

So yes, the ‘could’ makes us a little nervous, but….click.

Now the ‘could’ is a ‘might’ and there no mention of Eric Bailly at all in the headline, just a very curious use of the past tense to refer to something that ‘might’ in the future.

The content – from our old friend Samuel Luckhurst – is pure desperation.

The whole premise of his piece is that Eric Bailly and Marcos Rojo are not playing football (you may have noticed) so there is a chance that they might be sold. No insight. No inside information. No knowledge beyond that of somebody who recognises that footballers do not tend to stay at clubs where they are not wanted in the long term.

‘United’s wage bill has ballooned in the wake of Alexis Sanchez’s arrival and if they are to deflate it whilst reinforcing then a centre-back – or centre-backs – have to be cut. Rojo’s contract expires in 2021 and Bailly’s in 2020. Jones is approaching the last six months but United have the option of an additional year.

‘Mourinho is not precious enough to defend his own acquisitions, having cut his losses of Henrikh Mkhitaryan and agreeing to cut Zlatan Ibrahimovic’s second season short. No centre half has risen to Bailly’s heights under Mourinho but players have to be judged on what they are doing rather than what they have done. The Brighton and Newcastle debacles have marked the brittle Bailly’s card. Morgan Schneiderlin and Memphis Depay were not considered for selection in the weeks that preceded their January moves last year.’

Add all that together and you get ‘Manchester United might have put players up for sale in the transfer window’. Might they? Could they? Will they? Did they? Who gives a toss because….CLICK.

Elsewhere in Manchester Land
‘What Manchester United scouts have been doing before the January transfer window’ – Manchester Evening News.

Old man, meet clouds
‘IT is little wonder Jose Mourinho’s patience is tested when his £89million midfielder Paul Pogba “forgets” to take off his necklace after coming on as a substitute. This is a disturbing trend in the modern game…’ – Neil Ashton, The Sun, bringing you ‘the inside track on football’s big stories’.

Another old man, meet more clouds
‘A COUPLE of days ahead of his distinctly middle-of-the-road performance against Paris Saint-Germain, Roberto Firmino posted a picture of himself and wife Larissa Pereira sat on the bonnet of his £350,000 Rolls Royce. Why? Why do they do it?’ – Andy Dunn, Daily Mirror.

After pointing out that it was his wife who posted the picture, Mediawatch is rather hoping that Firmino answers with a Billie-style ‘because we want to’, with an added ‘what the shuddering f*** has it got to do with you, old man?’

The big Revel
It is Friday, and so Paul Merson is here with his predictions for Sky Sports. But that is not the story, for the Magic Man has returned to one of his most glorious catchphrases.

Paul Merson, January 31, 2016: ‘They are going well in the league and Shrewsbury are inconsistent – they conceded seven against Chesterfield and then beat Burton away. They are a bag of Revels.’

Paul Merson, April 2, 2016: ‘If Man City don’t win on Saturday then this is a big game for United, but it depends what Everton side turn up – they are a real bag of Revels’

Paul Merson, September 28, 2018: ‘Both of them (Bounrmeouth and Palace) are a packet of Revels, you just never know what you’re going to get.’

Paul Merson, November 30: ‘They’re a bag of Revels, you just don’t know what you’re going to get.’

He is Paul Merson, we love him, and he is most certainly not like a bag of Revels – you know precisely what you’re going to get.

Hare four good
Congratulations to James Nursey of the Daily Mirror for his ‘exclusive’ interview with Marlon Harewood, who ‘explains how he swapped scoring for selling super cars to Premier League stars’.

Who wants to tell him that The Sun, the Daily Mail and the Daily Star all got there first?

Richard Jolly on Arsenal needing to be more like Tottenham