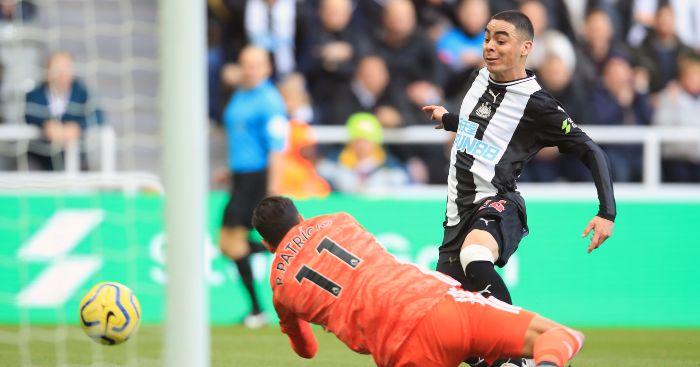 Not even the dazzling feet of Allan Saint-Maximin could ignite Newcastle’s Premier League campaign at St James’ Park on Sunday. His fellow frontmen Miguel Almiron and Joelinton looked like rabbits caught in headlights as the home side played out a drab 1-1 draw with visitors Wolves who had been to Slovakia and back last Thursday night.

At the other end of the pitch, a goalkeeping error from Martin Dubravka once again led to Newcastle conceding. Flapping at Adama Traore’s outswinging cross, he could only parry the ball to the edge of the box where Jonny Otto was on hand to volley home with the goal gaping.

Addressing Dubravka’s role in the Wolves equaliser during his post-match press conference, Steve Bruce described it as, “a poor decision,” from the Slovakian International, who earlier in the week had put pen to paper on a new six-year contract.

Bruce went on to add: “If you’re going to come and flap at it, then the one thing you can’t do is just push it in the middle of the goal.”

The previous weekend, during Newcastle’s 1-0 defeat at Chelsea, Dubravka was beaten by a low drive from Chelsea’s Marcos Alonso which certainly wasn’t heading into the corner of his goal. Although some were quick to jump to Dubravka’s defence in highlighting the fact the ball went through a sea of bodies and he had seen it late, most felt he could and probably should have kept the Spaniard’s effort out.

Dubravka’s transition from a relatively unknown quantity to becoming the Newcastle No. 1 proved pretty seamless when he joined on an initial six-month loan period from Sparta Prague in January 2018. The ‘try before you buy’ arrangement worked out well as previous manager Rafael Benitez opted to sign him permanently just a few months later. Since then, Dubravka has started 60 games in a row, playing every minute of the 2018/19 campaign.

Although Dubravka is firmly established as Newcastle and Slovakia’s undisputed first-choice, match-defining mistakes have increasingly crept into his performances. In the entirety of last season just three Dubravka errors led to a goal. So far this campaign, that number is already two.

It’s symptomatic of Bruce’s tenure to date, however, that there has been a drop off at both ends of the pitch. The defensive solidity of Benitez’s Newcastle is no longer there and in the final third their creative output appears to have dwindled.

Joelinton’s struggle for form has been well publicised – as is the case with any Newcastle No. 9 who doesn’t put the ball in the back of the net on a regular basis. But it isn’t fair to make the Brazilian the scapegoat. At Hoffenheim, he was most effective in a wide forward role, though Bruce continues to deploy him as a lone striker with nobody to feed off.

Once again, service was in very short supply and he didn’t look like he was going to test Rui Patricio let alone score a goal. Speaking about the Newcastle striker, Bruce acknowledged: “All forwards thrive off opportunities and chances, and in the second half in particular, we haven’t done enough to try to help him in that respect.”

Toon fans certainly want to see Joelinton succeed but the Brazilian must make himself more of a presence as patience starts to grow thin, with the proverbial ‘settling-in time for a new signing’ reaching its end. Audible groans could be heard around St James’ Park as crosses and cutbacks from wide areas bounced off him.

Though it is possible that the frustrations of Newcastle fans weigh heavier on Almiron. The Paraguayan international was wasteful in the final third as his search for that elusive first goal in black and white continues. He wasted a quickly-sprung Newcastle counter which had the Wolves defence scrambling. Carrying the ball at pace and unchallenged, he failed to find a pass to any of three Newcastle teammates and played the ball into the path of Wolves defender Romain Saïss to mop up with ease.

There was one occasion in particular where Almiron was put through one on one with Patricio and ought to have really scored. Using his pace to get in behind the Wolves defence after an incisive through ball from Matty Longstaff, the fleet-footed winger beat Portuguese keeper Patricio to the ball and toe-poked it beyond him, only to see his effort go the wrong side of the post.

Without being prompted by the written press, Bruce moved on from Joelinton’s less than promising display to discuss Almiron’s equally frustrating performance.

The Newcastle manager admitted: “I’m going to face the same questions with Almiron now, I would think for the next couple of weeks in particular. He’s young, trying to get used to the Premier League, and how often have we seen it?”

It certainly felt like an opportunity missed for Newcastle. Had it been for greater quality and composure in front of goal or a better decision from his goalkeeper, Bruce would have secured a much-needed three points to ease some of the pressure on Tyneside. But issues at either end linger.