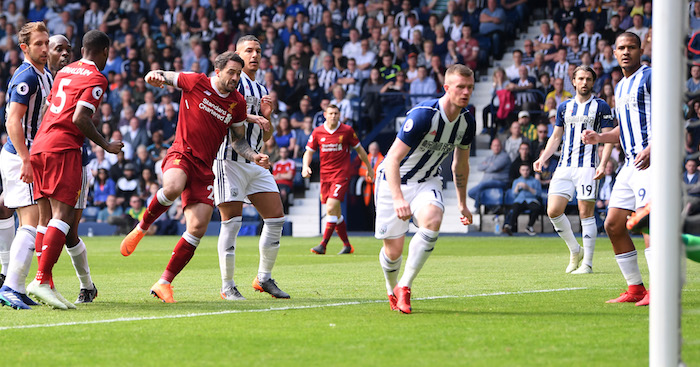 Danny Ings echoed Jurgen Klopp’s concerns over the dry pitch at The Hawthorns after he netted his first goal in 930 days in the 2-2 draw at West Brom.

Late goals from Jake Livermore and Salomon Rondon earned the Baggies a draw that leaves them eight points behind fourth-bottom Swansea with three games left, though their relegation could still be confirmed as early as Sunday.

Ings’ strike was followed by Mohamed Salah’s 31st league goal of the season but Jurgen Klopp’s side conceded twice in the last 11 minutes and afterwards Klopp was fuming over the state of the pitch.

Ings, when asked about his mood, told Sky Sports: “I’m disappointed. It’s always about the team. It’s ok scoring goals, but it’s about getting the three points and we didn’t do that today.

“I just think they gathered some momentum. It was quite tricky conditions. The pitch was very dry and it suited the long ball.

“They have some really physical players up there, good players and it really suited them. With the crowd and their long balls they managed to get some momentum and two goals.

Ings’ first Premier League goal in two and a half years was met with a raucous celebration.

“It meant a lot, as you can image. I’ve been working hard for the last two years for that moment. It has been a hell of a mountain I’ve had to climb to get into this position,” said Ings.

“I’m around the lads and I’m getting some game time and today was a positive step, but I would have preferred three points.”

Asked whether he should have had a penalty when Craig Dawson brought him down in the box, Ings added: “Well, I think it is one of them. I was looking the other way and it was a coming together. I don’t know if it was intentional or not.

“I don’t want to throw another player under the but I felt contact and he decked me. It might have been unintentional, I don’t know.”

Ings was also asked about the incident with Ahmed Hegazy in which the West Brom defender aimed a punch at Ings whilst the pair were down on the floor.

“It was a coming together. It’s what English football is about, it’s no big deal. I’m just frustrated about the result,” added Ings.