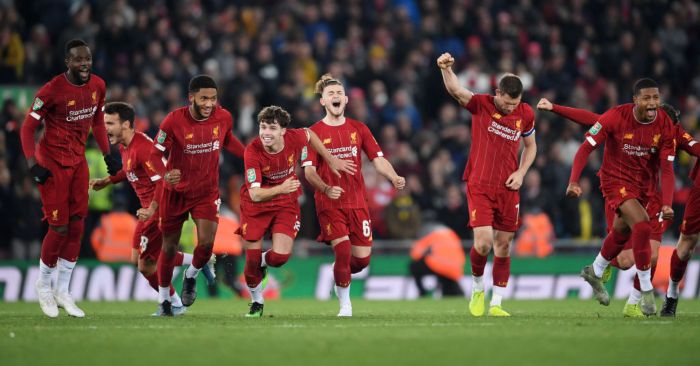 This was a meeting between Liverpool and Arsenal, but not as we know them. It was 90 minutes of football, but not as we know it. In the end, the hosts progressed to the next round of the Carabao Cup following a penalty shootout that saw one fewer goal scored than during the game that preceded it.

Curtis Jones and Caoimhin Kelleher will be the de facto heroes, spot-kick saviours, but there was so much more to savour before it got to that stage. As a standalone exhibition game, this was great entertainment and some kind of commemorative medal should really be produced and handed out to those involved.

Liverpool started four teenagers, and it showed. None of their seven Ballon d’Or nominees were in the matchday squad, but they were able to boast a Champions League final scorer in the shape of Divock Origi, and the enigmatic Belgian was able to score two goals which wouldn’t have looked out of place at Europe’s top table. This particular table was at a party hosted by the EFL rather than UEFA, and was full trick-or-treat sweets and Carabao energy drinks. Two over-excited teams riddled with mistakes ran themselves into the ground and ran in ten goals between them.

Liverpool are the most successful side in the history of this competition, but they had not been past the third round in the previous two seasons. For Arsenal, this is a competition they come second in. They have lost six finals since the EFL Cup was established in 1960 – more than any other team – winning it twice. They have been known in recent times for their blooding of youth, but things just ain’t the same.

Only two teenagers made their line-up here, but it was still an entirely different eleven to that which started the previous league game against Crystal Palace. In some areas, it looked like a stronger one on paper. The bite of Lucas Torreira in midfield alongside impressive 20-year-old Joe Willock, both of whom scored a goal apiece. The latter might treasure his in his own personal scrapbook regardless of the result.

There were two young and enthusiastic wingers either side of them in Ainsley Maitland-Niles and Bukayo Saka, and a German playmaker named Mesut Ozil behind the man who loves a midweek goal: Gabriel Martinelli.

Martinelli usually scores on Tuesdays or Thursdays but has now added Wednesdays to his list. Arsenal will hope he can throw in weekends too, and perhaps Unai Emery should give him the opportunity to do so.

The Brazilian has only played 45 minutes of Premier League football so far, primarily on the left-wing, and is thus yet to open his account. But in 360 minutes of football in the Europa League and Carabao Cup combined, where he starts games at centre-forward, he has eight goals – two per game.

Arsenal’s defence was still Arsenal’s defence, and at one stage Liverpool’s was arguably worse. They seemed determined to prove this so, but Joe Gomez was the best of the gang of four who played a big part in this “crazy match,” as Emery described it, while Kelleher still somehow still managed to make some good saves despite conceding five.

The home side’s excuse for this defensive showing was that one of their centre-backs was 17 years old, whereas one of Arsenal’s was 27 and cost £35 million. It certainly wasn’t a fairytale full debut for teenage Liverpool defender Sepp van den Berg, and promising 18-year-old full-back Neco Williams will have hoped for a better start to life in the seniors, but it was the experienced James Milner whose mistake led to Arsenal’s fourth. Possibly. It was easy to lose count.

Later in the game, sensing victory from jaws of a penalty shootout, Arsenal reneged on the agreement to not field good players, bringing on Matteo Guendouzi, Dani Ceballos and Kieran Tierney. This game wasn’t for them, though. The tide of goals stemmed temporarily after the introduction of Ceballos, but Origi made sure it went to penalties.

He had already scored one of the more outstanding goals of the game, up there with the strikes from Willock and Alex Oxlade-Chamberlain, as the game ran its own competition for goal of the tournament.

The Kop cheered once they realised captain Milner had won the toss. He’d already scored one penalty in this game and struck Liverpool’s first of the shootout. It was fitting that the game’s two heroes were a third-choice goalkeeper, Kelleher, and an 18-year-old Scouser who had come on as a substitute in the second half.

Prior to this game neither would have been known much outside of Liverpool (and maybe Ireland in Kelleher’s case) but for a few minutes at the end of this contest, they had a taste of what the high-profile Liverpool players have been able to experience regularly under Klopp.

Here it was 16-year-old Harvey Elliott stirring the Kop after the game, rather than Klopp. Kelleher was the hero between the posts, rather than Alisson, and Jones was the local boy in the photograph rather than Trent Alexander-Arnold. There was familiarity in the shape of Origi and an Arsenal team not playing very well, but the way they reached the conclusion to this game was different. It was a Carabao Cup game to savour, and one to be remembered.