Home Uncategorized Injured XI: the absentees worth weeping over 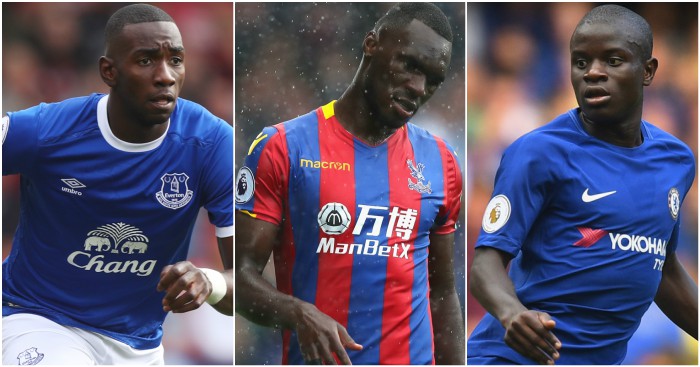 GK: Tom Heaton
You would understand if Sean Dyche felt like crying upon the news that the England keeper would be out for months. Heaton has been a rock for Burnley, missing only three games in four seasons for the Clarets. When he was absent for three matches last term, Dyche had to wheel out 37-year-old Paul Robinson, who has since had to retire.

But, in Heaton’s place this time, Nick Pope has made a very positive first impression on the Premier League. The 25-year-old has kept three clean sheets, conceding only two goals in four games and 54 minutes since replacing Heaton during the win over Crystal Palace.

RB: Seamus Coleman
Ronald Koeman has plenty of problems to solve at Everton and the right-back spot continues to be a concern in Coleman’s absence since he suffered a double leg break during Republic of Ireland’s World Cup qualifier against Wales in March.

Koeman has used five different players at right-back or right wing-back this term, with none of the candidates able to pin down the spot until Coleman’s expected return in December.

CB: Marcos Rojo
“One cruciate in 17 years. And now, against Anderlecht, I have two.” That was Mourinho not feeling sorry for himself after both Rojo and Zlatan Ibrahimovic fell victim to the same injury during the same game in the Europa League in March.

United haven’t struggled too badly in Rojo’s absence – they have conceded only two goals in the Premier League, keeping seven clean sheets out of eight games. But Rojo had established himself as part of Jose’s first-choice centre-half pairing last term, with his form alongside Phil Jones especially impressive.

CB: Shkodran Mustafi
“The player I least expected to lose during the international break was Mustafi,” said Arsene Wenger, apparently unaware even after all this time of how sod’s law works when it comes to Arsenal and their injuries.

The centre-back looked like he was on his way out of Arsenal during the summer but since the window closed, the Germany defender has established himself as an important cog in Wenger’s back three. The Gunners boss looks likely to be without Mustafi for another month.

LB: Benjamin Mendy
“The only problem we have – a big, big problem we have – is Mendy, six months out. It’s a big problem.” As problems go, and Guardiola was very keen to emphasise that the left-back’s absence is a big one, City don’t have many. But Mendy’s knee knack has been the only blight on an otherwise blistering start to the season. Aside from Vincent Kompany’s injury, of course, but his non-participation is almost presumed these days.

Mendy’s injury was bad enough to warrant the sympathetic t-shirt treatment from his team-mates last weekend. Its seriousness has also prompted Guardiola to admit that he might have to go shopping for another left-back in January.

RM: Ross Barkley
Koeman and Barkley certainly don’t see eye to eye. But having bought three No.10s to try and replace the midfielder, with none of them succeeding, the Everton manager would surely have turned to Barkley by now. What does he have to lose?

But Barkley remains on the sidelines, perhaps grateful that his worth to Everton is growing in his absence. When he returns, he has a point to prove, either to Everton or potential suitors in January. Whether Koeman will be around to benefit remains unclear.

CM: N’Golo Kante
As Mourinho suggested, Antonio Conte hasn’t wasted any opportunity to highlight what a miss Kante is to Chelsea. Of course he is, he’s brilliant. But Conte also has an axe to grind with the Chelsea hierarchy over their refusal to back him sufficiently in the transfer market during the summer.

The first game Kante missed saw Crystal Palace score their first goal of the seaosn and earn their first points. It was no coincidence.  Against Roma in midweek, Conte moved David Luiz into midfield but that created problems elsewhere as the Italians recovered from 2-0 down to lead and eventually take a point from a 3-3 draw.

LM: Paul Pogba
Mourinho has repeatedly stated since Pogba pulled his hamstring against Basel over a month ago that he does not know when the midfielder will return. Which, of course, is almost certainly untrue but it emphasises how hard-done-by the manager feels to be without his record signing.

Mourinho has also oftem played on how much he is hampered by the loss of Marouane Fellaini’s physicality as well as Pogba’s. Indeed, their absence, along with that of Michael Carrick, was used as an excuse for the performance United offered at Liverpool, where Mourinho said “I needed my bench, but I had no bench”. On Friday, he said, apparently without a hint of irony: “The best thing to do is to speak always about opportunities for others, trust for others and believe in others.” There have certainly been more mentions of Pogba and Fellaini’s absence rather than Ander Herrera’s contribution in their absence.

RF: Sadio Mane
The Liverpool forward was flying at the start of the season when he scored three goals in the opening three games. But suspension and then a hamstring injury has since deprived Jurgen Klopp of arguably his most important attacker.

CF: Christian Benteke
Steve Parish admitted that Palace had been left light in attack following their failure to sign a striker in summer so it was entirely typical of their luck that Benteke knacked his knee barely a fortnight later during the 5-0 thumping at Man City.

At least now, though, Wilfried Zaha is back. The Palace academy graduate gave a man-of-the-match performance while scoring the winner against Chelsea last week and offered the first glimpse of positivity this season for the Eagles. If he and Benteke can rekindle the partnership that thrived last season, then Roy Hodgson has a great chance of pulling Palace up the table. In which case, Benteke can’t come back quick enough.

LF: Yannick Bolasie
Everton’s forward line has been slower than erosion this season, and though Bolasie is not the centre-forward the Toffees so clearly lack, he would at least offer some genuine pace and help drag his side up the pitch, even if his team-mates might struggle to keep up.

As much as Koeman would love to have him back, however, Bolasie can’t be rushed. The Congo international underwent two operations on a career-threatening knee injury and is expected back before Christmas. Perhaps just in time for a new manager.