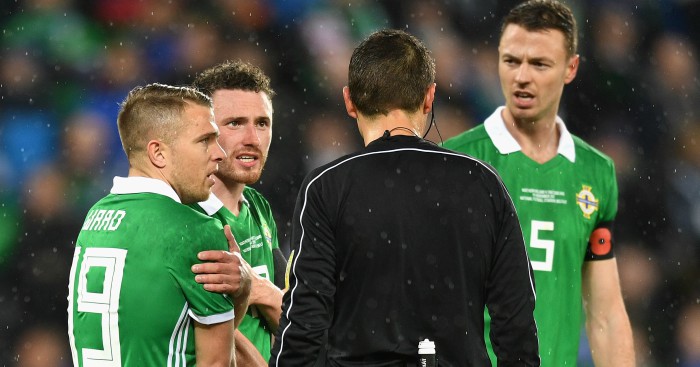 Jonny Evans insists Northern Ireland can feel more aggrieved about Switzerland’s controversial penalty than the Republic did after Thierry Henry’s handball in 2010.

The Northern Irish were left seething with a sense of injustice after Ricardo Rodriguez’s 58th-minute penalty left them with a mountain to climb if they are to reach their first World Cup in 32 years.

Referee Ovidiu Hategan gave the spot-kick having determined Corry Evans handled Xherdan Shaqiri’s shot, though replays were inconclusive over whether it even struck the Blackburn midfielder’s arm, which was tucked in by his side as he turned.

It evoked memories of the William Gallas goal that sent France to the 2010 World Cup at the expense of the Republic of Ireland, when Henry’s clear handball in the build-up was not spotted.

Jonny Evans, Corry’s older brother, believes Northern Ireland have extra cause for hurt after their 1-0 loss.

“It was actually a worse decision because the ref has made a call that was not there,” he said.

“It’s different if he didn’t see it. He’s claimed he saw something that didn’t happen which is the hardest part to take about it.”

Corry Evans was equally furious and his misery was compounded by receiving a yellow card that rules him out of the return leg.

“It was disgraceful,” he said. “I clearly didn’t put my hand up. I know it hit me on the back of the shoulder and I’m just absolutely gutted.”