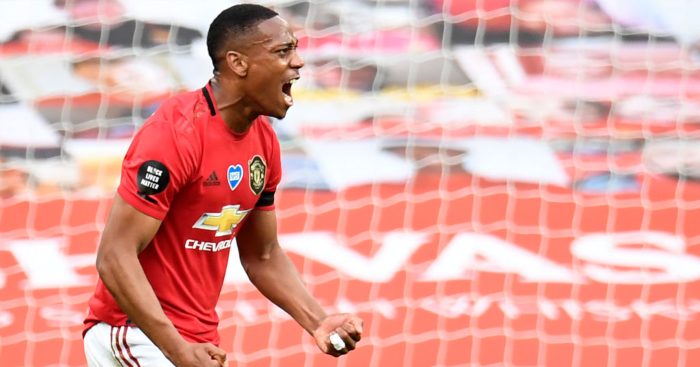 Inter Milan will have to pay a huge fee if they are to land Man Utd forward Anthony Martial this summer, according to reports in Italy.

Martial started well at Old Trafford under Louis van Gaal, but struggled under Jose Mourinho as the Portuguese coach stripped the Frenchman of his number nine shirt number.

That led to rumours that Martial would leave the club but the 24-year-old has since regained his number nine shirt, and is starting to produce the form that earned him a move to Man Utd in the first place.

Martial has scored 21 goals and five assists in all competitions this season and has become a key part of Ole Gunnar Solskjaer’s side that is currently on an 18-match unbeaten run.

And now Calciomercato claims that Martial is a ‘constant presence’ on Inter Milan’s transfer shortlist.

The report adds that Martial’s ‘profile is still considered very welcome’ at Inter in the event that they sell Lautaro Martinez, who has been linked with a huge summer transfer.

The two ‘real obstacles’ in the way of Inter completing a deal for the Man Utd forward are his lengthy contract until 2024 – with an option of another year – and his minimum €70m (£63.5m) valuation.

However, Inter do have one weapon in their armoury with the potential to use defender Milan Skriniar – who has been linked with Man Utd in the past – as a makeweight in the deal to reduce the cost of any transfer.