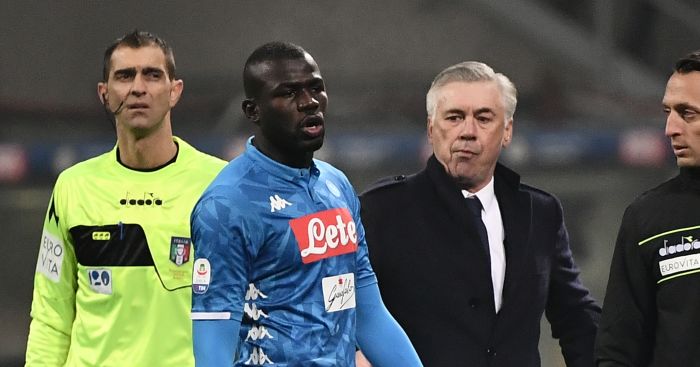 An ill-tempered match between Inter and Napoli on Wednesday saw Senegal defender Koulibaly complain of racist abuse from the home crowd, while there were violent scenes outside the stadium as one fan died following a collision with a van.

Four others were injured in separate incidents and the FIGC has responded by ordering Inter to play two games behind closed doors, while the Nerazzurri will be forced to play a third game without the section of their San Siro home generally filled with the hardcore ‘ultras’.

Inter’s next three home league games are against Sassuolo on January 19, Bologna on February 3 and Sampdoria on February 17.

The rest of the Serie A games will still go ahead, however, FIGC president Gabriele Gravina has confirmed.

Gravina told Sky Sports Italia: “The championship will not stop…We do not stop against those who want to contaminate our world.”

Gravina described what happened at the Inter-Napoli game as “no longer tolerable”, adding in a statement on the FIGC website that the governing body condemns “all forms of both physical and verbal violence, with the aggravating circumstance of racial discrimination. We do not tolerate such behaviour ruining football.”

Deputy Italian Prime Minister Matteo Salvini said he would call an emergency meeting in the new year and wrote on Twitter: “In 2018 you can not die for a football match.

“At the beginning of the year I will convene the leaders of supporters of Serie A and B clubs… so that the stadiums and the surrounding area will once again become a place of fun and not of violence.”

Napoli head coach Carlo Ancelotti wanted the game at Inter suspended because of the alleged abuse of Koulibaly, who was sent off late in the game for sarcastically applauding the referee after a caution. Inter went on to win 1-0.

Anti-discrimination group Fare described the treatment of the Napoli player as “appalling” and said the punished doled out to Inter by the FIGC was not strong enough.

Fare said in a statement: “The incident last night follows a pattern in which players are abused, they report it to the referee, the referee fails to take effective action and the player is eventually sent off. This pattern is observed across Europe, it highlights the repeated failure to protect minority players to tackle what is a systemic issue in many countries.

“We welcome Carlo Ancelotti’s comments pledging to take his team off the field of play if this type of abuse happens again. Under Ancelotti’s leadership the position of Napoli on racism and discriminatory abuse is clear, we note that the club previously threatened to take their players off the pitch before a match against Atalanta on December 3.

“Kalidou Koulibaly has consistently been the target of an alarming level of racist abuse while playing against clubs across Italy, including Atlanta, Juventus, Lazio and now Inter Milan. Too often, the punishments handed out by Italian football authorities are weak and ineffective.

“Dealing with racism must be a priority for the new regime at FIGC, the Italian FA, an FA that in the past has had a bad record of dealing with racism, where a former President Carlo Tavecchi served a six month UEFA ban for racist remarks.

“We note the sanction applied to Inter, two matches behind closed doors is a clear signal, but it is not enough, so much more still remains to be done to stop the rot at the heart of Italian football.”

Napoli forward Dries Mertens gave his support to his team-mate, saying on Twitter: “You’re one of the most beautiful people I know, please never change. Don’t react to this b*llshit. Let’s stand together! #notoracism”

And Juventus star Cristiano Ronaldo posted on Instagram: “In the world and in football I always want education and respect. No to racism and any offence and discrimination !!!”

Manchester City captain Vincent Kompany wrote on Twitter: “This is unacceptable! Elected politicians set the tone with divisive rhetoric granted but some level of reason has to return!”

Inter released a statement on Thursday evening condemning the abuse of Koulibaly, saying the club stood for “integration, hospitality and progressiveness”.

“These characteristics have defined the history of Milan – a city that stands for inclusion and respect,” it read.

“Together with our city, we have always been fighting to help create a future free of discrimination. We are committed to promoting these values wherever we operate and they have always been a source of pride for the club.

“From that night 110 years ago when our founders set us on our journey, we have always said no to any form of discrimination.

“That is why we feel obliged today, once again, to reiterate that anyone who does not understand or accept our history – this club’s history – is not one of us.”