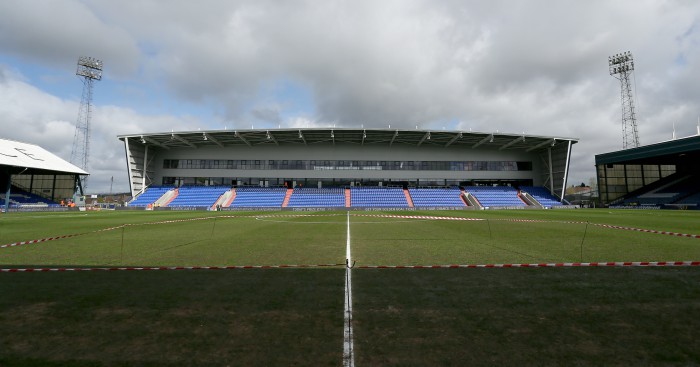 When Richie Wellens was appointed caretaker manager at Oldham in September following John Sheridan’s departure, he knew exactly who to call.

As a youngster at Manchester United when they won the Treble in 1999, he watched Sir Alex Ferguson lead the first team to the summit of European football, making a solitary appearance for the club in the League Cup the following season. Now, some 18 years later, Wellens looked to Ferguson’s guidance once more and found his former boss only too happy to oblige.

“I’d have been foolish not to ring him up. He’s the greatest manager this country has ever had,” says Wellens. “When I was a young footballer I didn’t ask for advice. I’m going to make sure I don’t make the same mistake as a young manager.

“The main thing I asked him was how to switch off. I couldn’t stop thinking about what I was going to do, how the opposition were going to play. I wasn’t sleeping very well, so he gave me his views on that and a number of other things. I ended the call by asking if it was okay to ring him again in the future and he was great about it. It sums up the man really that he was prepared to speak to a young manager after the career he’s had.”

Wellens intends to keep Ferguson’s advice to himself but, whatever tips the former United manager shared, they have clearly helped. After one win in their first nine games, Oldham have claimed victory in Wellens’ first two fixtures in charge, seeing off promotion hopefuls Peterborough United at Boundary Park before returning from the long trip to Portsmouth at the weekend with another three points. Then came a win over Crewe in the Checkatrade Trophy.

The rookie boss didn’t have much time to prepare for his first match as a manager. Following a 5-1 thrashing by Rotherham United, Sheridan’s third permanent spell in the hot seat was brought to an end on September 25. Wellens was promoted from his duties as first-team coach to stand in the dug-out the next day, but he had watched Peterborough closely this season and had a plan to turn the Latics’ fortunes around.

“They play some great football, they score a lot of goals, but I felt that teams stood off them,” he explains. “So I wanted us to start higher up the pitch and press the ball higher.”

The tactic paid off as Oldham moved off the foot of the table with a 3-2 win, despite having to play with ten men for the final half-hour after defender Brian Wilson was sent off. A second win in the space of five days has lifted the Latics to 18th, with Wellens encouraged by a commanding display at Portsmouth as he bids to win the manager’s role on a full-time basis.

“We haven’t just got two lucky wins – it’s the way we’ve played, against two teams in Peterborough and Portsmouth who’ll be around the top six come the end of the season.

“To go away in the second game of your managerial career and win at Pompey when there’s 18,000 there, I’m obviously very proud and grateful to the players. The nicest thing for me was when I came out of the ground and the Portsmouth supporters were saying what a good football team we have. That’s what makes me feel good, the fact that opposition fans are telling you how well your team has played.”

Wellens has a wealth of experience in the Football League that he can call upon as he adjusts to the pressures of the job. After struggling for opportunities at Old Trafford, the ball-playing midfielder found his feet at Blackpool and helped the Seasiders win promotion to the third tier in his first full campaign.

He then enjoyed two years at Oldham with his second season, in 2006/07, coinciding with the last time the club reached the play-offs. The Latics have endured an interminable 20-year stay in League One and if that is ever going to change, Wellens believes they must adopt a long-term approach to success.

“We need to try and find an identity,” says the 37-year-old. “For too long the club hasn’t had an identity. The last two games have gone a long way in giving the players belief in how they can play.

“If we’re playing football and we start to build an identity, it can go a long way to attract younger players to the club, because they know that when they play in the first team they’re going to play good football, they’re not going to play long ball. That’s what I’m trying to get across, the fact that if we do have a long term plan it’ll stand the club in good stead.”

It is difficult to imagine Clarence Seedorf having a similar vision for Oldham but the Dutchman is one of the names on the club’s shortlist that Wellens must prove himself against. Seedorf held talks with chairman Simon Corney last Thursday after being given a tour of Boundary Park, although it is believed he hopes to find a role in the Premier League or the Championship. Regardless of the speculation, Wellens isn’t perturbed.

“He’s a fantastic name in world football, one of the best players there has ever been. So who am I to say that the club shouldn’t get Clarence Seedorf in as manager?

“I watched him play centre midfield against Michael Carrick and Darren Fletcher (in Carrick’s testimonial in June), who are still playing in the Premier League, and he tortured them. It’s a fantastic name and, if he does come in as manager, I’ll have to adapt to that, whether that be as his number two or me finding somewhere else.”

Wellens is satisfied with his own audition, however, and feels ready to take the plunge into full-time management. Given Oldham’s recent revival, it may well be his job to lose.

“I’ve always wanted to be a manager, I just didn’t know when I’d be ready. But since I’ve had the job I think I’ve done everything that’s been asked of me and it’s given me a buzz for it. When you leave school at 16 and you play the game for 21 years as a professional, it’s the obvious next step for me.

“I think anyone in my position would hope for some news sooner rather than later. I think I have the respect of the players and we want to keep the momentum going, keep the spirits high, and move forward in a positive way.”

This piece first appeared on The Set Pieces. You can also hear Matt on The Totally Football League Show