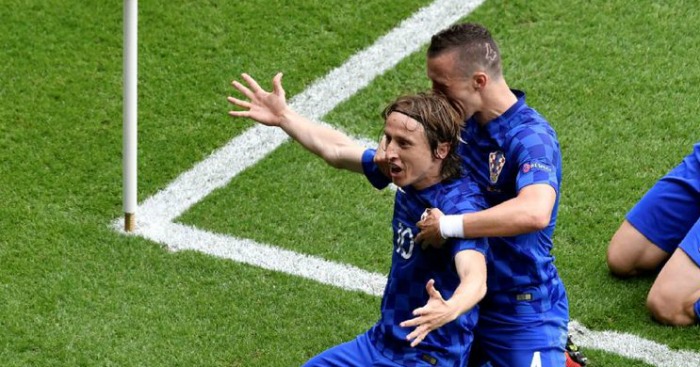 “This goal maybe makes him a bit more visible, but, the way I see football, Modric is indispensable.”

Those words were not uttered after Luka Modric’s really quite wonderful winning goal for Croatia – if this were 1986, this writer would have been forced to spend the next three hours throwing the ball up for her brother to practise an almost-unteachable technique – but in February after a rare, rather more forgettable strike for Real Madrid against Granada.

“Luka should shoot more,” was the simple verdict of his manager Zinedine Zidane, who could be forgiven an ‘I told you so’ moment as his ‘connector’ connected in a way even he would have struggled to envisage.  Sweet, pure and sexy all at the same time. Shame on Glenn Hoddle for attempting to dilute the credit by blaming the goalkeeper; sometimes it’s okay to be a child again and say ‘wow’ without looking for a guilty party.

It’s ridiculous to suggest that a player who has been named in the team of the year both domestically and in Europe this season is underrated, but Modric – by virtue of his position, his natural quietness and the bombastic self-promotion of others – is easily taken for granted. His ability to create space for his wizardry while seemingly not moving at all is unparalleled in world football. It’s not the kind of attribute to earn you a place on the cover of the latest FIFA game or a headline-friendly acronym, but in the frenzy of tournament football, Modric’s unflappable calmness is priceless.

In the first frantic 20 minutes of Croatia’s opening Euro 2016 with Turkey – while all around him were losing their heads – Modric did not misplace a single pass. By half-time he had given the ball away only twice in 28 passes. It was Modric who was aware of how much space Darijo Srna was enjoying on the right and it was Modric who found him time and time again. He may have only directly set up two of Croatia’s 19 chances but without him, they would have been a collection of enthusiastic musicians without a conductor.

His influence does not end at pretty passes; Modric is no luxury player in the centre of midfield, with three tackles and four interceptions testament to his hard work without the ball, even if it is driven by his understandable belief that it will be much safer in his possession.

On Sunday, Modric scored a wonderful goal that makes him much more visible, but he was already the very best in the world at being simultaneously understated and brilliant.