Home Home Page Ipswich might finally be interesting this season 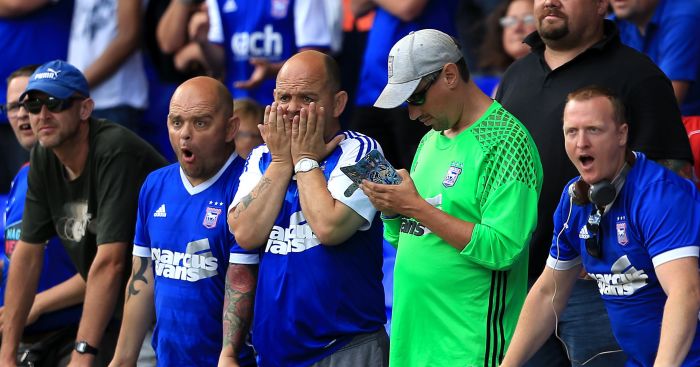 Champ change
So, unlike the majority of contributions to the mailbox a week before the Premier League starts, such as has Mourinho turned Man U sour?, Can Pep retain the title in such dominating style?, Has Klopp fine tweaked this Liverpool side into title contenders? Do Chelsea and Spurs need additions to their squad?, and what will Arsenal be: good or Arsenal?, along with other such musings for the rest of the league bar the big 6, for a sizeable majority the football season starts tonight. Derby v Reading. Real league footy, and the point in the season when everyone has hope. (Congratulations to Burnley by the way).

In anticipation to this I visited this fine site to see if there was any mention of the unwashed from the lower league, and I was delighted to see there was a Championship Preview! I clicked in eager fashion to see what prospects my own team Ipswich had along with the other teams contending to reach to promised land.

Actually, in contrast to the review I am looking forward to this season, because Ipswich fans are stupidly optimistic like that, but the reason being is that in hiring Paul Hurst who took Shrewsbury to the League One playoff finals last year, we have hired upwards from below rather than McCarthy and Keane previously who you would say were taking a step down to Ipswich in order to take them back up. Hopefully he will recruit from the leagues he knows rather than journeymen looking for one last chance to play in the Premier League. Something fresh is all Ipswich fans want, we are no longer an ex Premier League side looking to get back into the Premier League, I’m hoping Hurst can create the atmosphere of a side that has just got into the Championship from below, and are eager to kick on.

Anything but a sodding Championship side. Watching teams go up and down as an Ipswich fan is like watching time-lapse football.

So let’s get it started, I’ve had £10 put aside for ages for a new ‘quaint old’ road map to plan journeys to either Premier League grounds or League One grounds. The one I’ve had for Championship ground is literally falling apart.
Chris ITFC,  Liverpool

It’s funny cos it’s true
Given our “rule” that countries which have unpopular governments and major social problems shouldn’t host international sporting events, should England be allowed to have the 2030 World Cup?
Matthew, Belfast

Hectoring Hector
It may be pre-season but for me, it’s time Emery started playing bad cop

Bellerin was rubbish against Chelsea and it’s precisely because of those kinds of performances we signed Lichtsteiner.

Bellerin seems to be under the impression that he can just cruise along as he did under Wenger and continue to put in these piss-poor performances.

Emery has to step in, tell him he needs to buck up his ideas and for me, Lichtsteiner starts against Lazio.

If the Swiss plays well, he retains his place against City.

It’s time Emery laid down the law and told the likes of Bellerin and Mustafi that their poor impersonations of defenders will no longer be tolerated.

It’s simple – just put out the best team on form – if that means Xhaka, Bellerin and Mustafi don’t get in then tough sh*t.
Graham Simons, Gooner, Norf London

And now you know
I almost missed the nice letter on hosting the world cup from Steve, Los Angeles, as I automatically scroll past the first few boring mails on Man U.

However, it left my wondering… what the flying feck is a “boondoggle”???

I thought it was maybe one of those things you had to put in a computer to get special software to work. Then I remembered that’s a dongle and it didn’t seem relevant anyway. Fortunately google translate helped out. If anyone is still wondering, it appears to be a white elephant. Well the UK is expert at them (see “Millennium Project”) so roll on world cup!
Rob, of Sweden (someone should tell The Guardian that Östersund is about 600km drive south of the arctic circle).

Mike drop
Long-time reader and first time writer. I along with most Newcastle United fans applaud your constant bashing of Mike Ashley. Please continue to report on NUFC better than national ‘journalists’ that haven’t got a clue what they’re on about.

Trivia Corner
Rob, Cork I believe that one to be Kanu?

1) Who is the only player to have played in every English league, from the Conference to the Premier League, La Liga, the Uefa Cup, the Champions League and the World Cup?

2) Who are the eight players to have won the Ballon D’Or, the World Cup, and the European Cup/Champions League?
Doug, Glasgow

…Q. Who is the only player to have won the Champions League, Uefa Cup, Uefa Super Cup, Premier league, FA Cup, Community Shield and been relegated?

My pay it forward teaser: Which player has played alongside the 3 aforementioned quiz answers (Sol Campbell, Shay Given, Michael Owen) as well as John Terry and Wilfred Zaha?
Nik, Liverpool

…I love a bit of football trivia and this is without doubt my all-time favourite:

Name the THREE league clubs which have swear words in their names.
Paul (Geordie LFC fan, on a train near Rickmansworth)