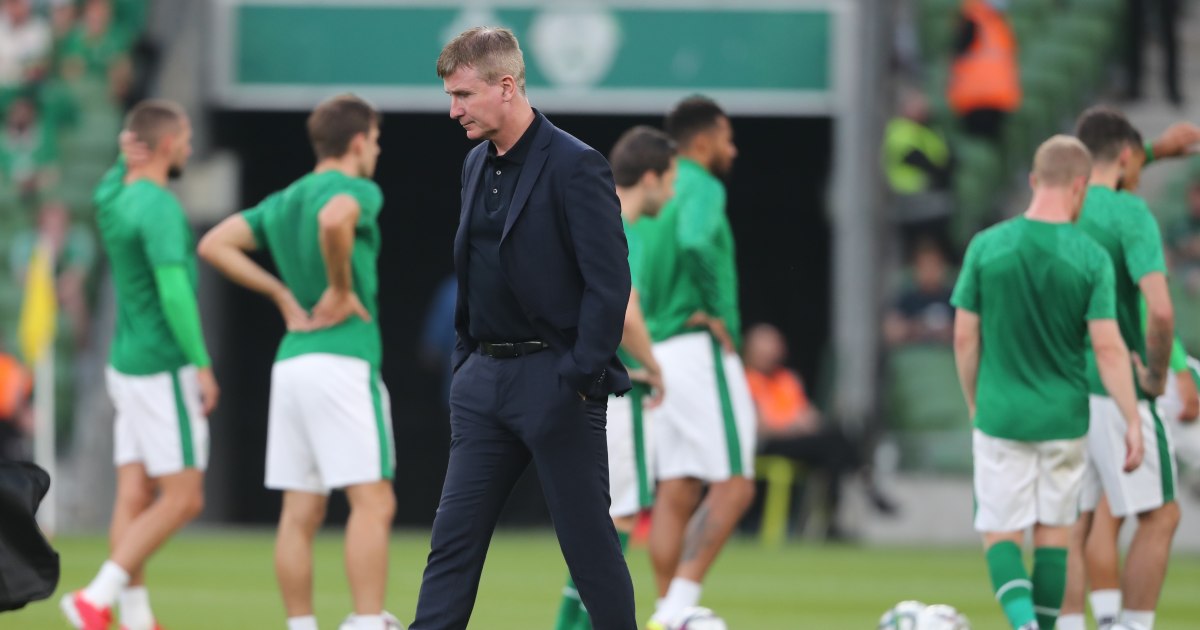 Talk during the last ‘International Break ™’ suggested a loss at home to a far superior Serbian side and it could be curtains for Republic of Ireland manager Stephen Kenny. Ridiculous.

Of those men, the only two who have any legitimate claim are Carsley and Allardyce, but for completely different reasons.

Carsley is viewed as one of the most promising young coaches in the UK and Ireland and would be similarly progressive and forward-thinking to Kenny. The problem is that he is the current England U21s coach, and sadly that is a better job in the current climate, and a job more likely to lead to a successful coaching career than the poisoned chalice – which literally has ‘poison’ written on the label – that is the Irish job in 2021.

On the other hand, Big Sam would probably somehow squeeze into a tournament in the next four years but would knock back Irish football even quicker and further than a pint of wine while dancing to Rihanna.

We’ve taken the short-term view before and it’s led us to where we currently are: ground zero, a position where results are obviously poor but resources are infinitely worse.

But how did it get to this?

At the turn of the century, Irish football was looking at a bright present and an even brighter future. Memories of Jack Charlton were still fresh in the memory, youth teams had torn up trees on the international stage, and there was a squad largely full of Premier League players, propped up by the two Keanes.

Roy, the heartbeat and captain of all-conquering Manchester United, and recipient of both Player of the Year gongs in 2000, and Robbie Keane, the young prodigy of Italian giants Inter Milan and later David O’Leary’s Leeds United.

The Road to Asia featured an unbeaten qualifying campaign and second place, ahead of heavyweights Holland and behind – only on goal difference – Portugal’s golden generation of Figo, Rui Costa et al.

Of course, the 2002 World Cup is largely remembered for Saipan, the second Irish civil war, and arguably the biggest ‘What if?’ in Irish sporting history. But let’s not rehash that for now, and instead focus on the performances of the team and what came after.

Playing a brand of exciting and energetic football, the Boys in Green didn’t lose a game in 90 minutes, got through a group with future finalists Germany and back-to-back African champions Cameroon, and only lost to a stacked Spanish side on penalties, both during the game and in a shoot-out.

For most competent footballing nations, this would have been used as a springboard for success, but for Ireland, and the disgracefully corrupt FAI, it was the last stop before the road to ruin.

Mick McCarthy was swiftly sacked, partly for losses in the opening two games of EURO 2004 qualification, but more for the rumblings that remained post-Saipan.

What followed was slow and steady decline, with Brian Kerr, coach of those successful youth sides, taking the job for just over three years in charge before Steve Staunton, captain in Keane’s absence in 2002, replaced him.

Stan the Man lasted little over 18 months, and his spell in charge is best remembered for a 5-2 loss to Cyprus and the “I’m the Boss, I’m the Gaffer” speech which was arguably the most iconic Irish football moment of the mid noughties.

The rot had set in.

The FAI had presided over two failed appointments and three failed qualifying campaigns following the euphoria of ‘02.

So, they decided to hire a true legend of the game, a ready-made gun, if not a gun with just one or two bullets left, in Giovanni Trappatoni.

The man known as ‘Trap’ instantly improved results but the style of play left much to be desired as conservatism became the order of the day, with the Italian seemingly not rating the players’ technical ability and having an allergy to creative midfielders, and Andy Reid’s guitar sessions.

Despite the negatives, Trap did bring Ireland within a Thierry Henry handball of the World Cup in 2010, and to their first tournament in 10 years at EURO 2012. Sadly, results mirrored style of play here, as his charges fell to three heavy losses at the group stages.

This effective if not exciting style of play continued under Trap’s successor, Martin O’Neill, who alongside his assistant Roy Keane (making his second return to the Irish fold since Saipan), brought further EUROs qualification in 2016, famously beating World Champions Germany en route.

Here Ireland far outperformed their performances four years prior, drawing with Sweden and beating Italy – Robbie Brady playing the role of Ray Houghton this time around – before losing narrowly to hosts France in the round of 16.

Throwback to Euro 2016 and that goal against Italy in Lille. pic.twitter.com/a7I7Z6wfwm

Spirits had been lifted, passion and pride had been restored, but sadly it was another false dawn for football in Ireland. And the beginning of the deepest descent the game has endured.

You could lay some blame at the failings of Kerr and Staunton, and the negative style of Trap and O’Neill, and at Stephen Kenny’s record so far in charge, but that would be to miss the primary culprit for all that is wrong in Irish football, and the 20-year decline – The FAI.

For managers, football is a results business, one that is short term and focus is attached near solely to the present, particularly at international level. Fail to qualify? Probably out of a job.

For those responsible for the protection and development of the game in Ireland, the focus must be long term with an overall goal of sustainability as well as progression.

In Ireland, the long-term focus from the FAI, and chiefly John Delaney, has been to line their pockets, and in the process ignore everything else, leading to this malaise.

In the 20 years since our last World Cup, the League of Ireland has arguably gone backwards, young boys and girls have turned away from the game to play other sports, academies are non-existent, and the standard of the squad has gone from one that was jampacked with top Premier League level talent to one that would struggle to stay in the Championship.

Hell, the men’s team doesn’t even have a primary sponsor!

Such are the issues, it would be foolish to turn our back on Stephen Kenny so soon, and resort back to a Give it a Lash Jack nostalgia trip in the shape of another route one manager.

Be patient, accept where and what we are, a minnow – a win away to Azerbaijan this week would be somewhat of a surprise let’s be honest.

Allow more time for a manager to change the culture, the style of play and the general mood in the Irish game and amongst the fanbase – this writer can’t be the only one who’s found it hard to engage in recent years.

Rome wasn’t built in a day and Irish football is rebuilding from rubble.

So, instead of directing your ire at the people trying to fix the game, point it solely at those who put it in its current position.