Home F365 Features Iron awe to Scunny shambles – is there any hope for Hirst? 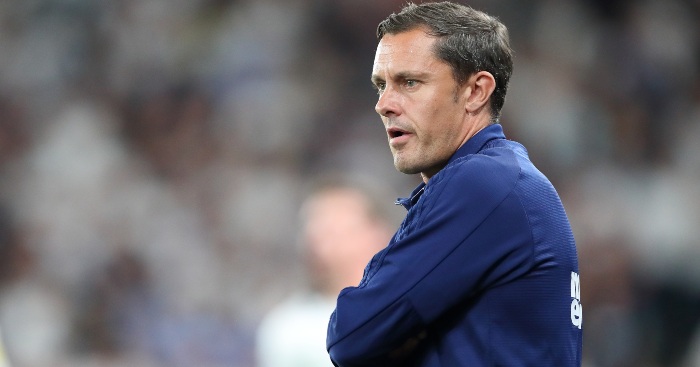 If ever you want a timely reminder of just how quickly a year passes in football, then afford yourself a couple of extra months and hark back to May 2018. Scunthorpe United were in the play-offs for a second successive season and their current manager had guided Shrewsbury Town to a surprise top-six finish.

Fast-forward just 16 months and the Iron and Hurst have forged together in what could and should have been one of the strongest managerial match ups in the Football League. Instead, the merging had left the Lincolnshire outfit propping up the rest of the division – and the EFL – after over a month of the new season.

Where did it all go so wrong for Scunthorpe? The 2017/18 season saw the club reach their second successive play-off campaign despite/thanks to the dismissal of largely successful and perennially well-liked Graham Alexander in the late echelons of the campaign.

Momentum was picked up after the current Salford City chief departed Glanford Park but it was one of the last times positivity was tasted in this corner of Lincolnshire since.

Caretaker turned full-time manager Nick Daws was sent packing after a 5-0 home demolition by Fleetwood Town in a season which saw three permanent managers – when do they ever work out? – and after an initial bout of optimism around Christmas time, Stuart McCall was unable to stave off the most rushed inevitable relegation in recent memory.

Andy Dawson’s winless two-month spell made it inevitable that an experienced man was needed to guide Scunthorpe through their toughest time on the pitch. Step forward Hurst. Tarnished perhaps by a torrid time at Ipswich delivered as a reward for great work at Shrewsbury, Grimsby Town and Boston United, but with enough nous and skill to make this a marriage made in heaven.

A club and man both with good pedigree and reputation aplenty meeting at a low point in both of their lives to rejuvenate one another. Well, that was the plan anyway. As is all too often the case, this may be a relationship doomed to fail before the honeymoon period – if it even existed – is over.

Only two to three years ago, fans of Scunthorpe and many who aren’t could name the Iron’s strongest XI with ease. This was a side with purpose, identity and a clear vision to the next level. Losing the former has seen the club making a case of mistaken identity and the next level has been a huge step down.

Seven games in with a solitary point to show for it, Scunthorpe, who were so close to the Championship, appeared destined for National League football. Their first win, a 3-0 home triumph over Morecambe, offers some hope but there is little evidence to suggest Iron can sustain such form.

It is natural that clubs of a certain ilk are prone to losing their best players to clubs higher up the food chain. That this is the first season Fleetwood are operating at a higher level than Scunthorpe and yet possess perhaps their two best players over the past three seasons in hotshot forward Paddy Madden – one of the finest finishers League One has seen this decade – and the owner of one of the most magical left feet in Josh Morris.

Even more a damming indictment is that potential replacements for those players lie at Scunthorpe’s disposal, though clearly wished to be disposed of by Hurst. Adam Hammill, he of Premier League appearances and wonder goals is left to rot away in the reserves. Olufela Olomola meanwhile is on loan at Carlisle United and the 22-year-old already has three goals to his name, just two fewer than the entire current Iron team moulded together.

Another high turnover of players over the summer aided by a manager already making more enemies than friends puts owner and Chairman Peter Swann in a difficult position. Managerial merry-go-rounds here have not produced much fun but the constant circulation has failed to provide blood to the head of those in charge of proceedings at DN15.

Proceedings at the club were summed up by the loan signing of Jamie Proctor prior to a home defeat against Carlisle which the striker was signed in time for but not registered correctly, failures on and off the pitch typifying exactly where the club is at this moment in time.

Unlike before, there appears no clear plan, identity, or way forward. Fast-forward another year and it is devastating to think where this club could be.

The recent relegations from the Football League for the likes of Leyton Orient, Chesterfield and Notts County show that no team is too big to drop into the National League. Scunthorpe are a club bigger in name than perhaps all three, but time waits for no club in football. There is no quick fix for Scunthorpe; this weekend’s win over Morecambe has to be the start of a sustained improvement.