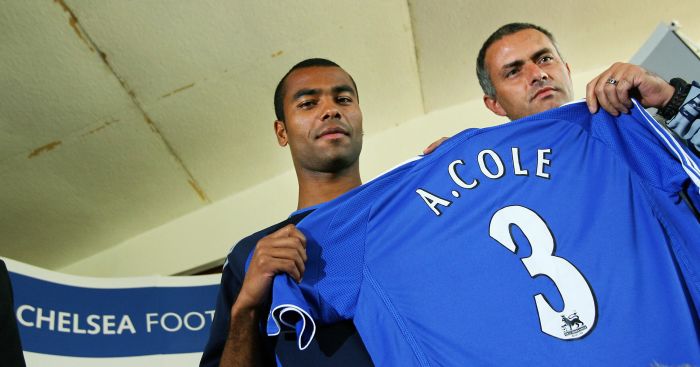 As Ashley Cole calls time on a career loaded with trophies and individual acclaim, we are left wondering why a man who was the greatest left-back in the world for the best part of a decade falls short of that pantheon of footballers held up as ‘legends’ of the game.

Three Premier League trophies, a Champions League, seven (yes, seven) FA Cup wins, a four-time selection in the PFA Team of the Year and twice in the UEFA Team of the Year – Ashley Cole must be one of the greatest footballers not to have a seat at that immortal top table.

His achievements at both Arsenal and Chelsea in isolation would, in other circumstances, be enough to secure legendary status at either club.

Cole’s acrimonious departure from Arsenal explains why he is not considered a legend in north London – despite his key role in their invincible season. He was accused of following the money to Chelsea, who doubled his wages to £90,000 a week; he was nicknamed ‘Cashley’ by the Arsenal fans who pelted the left-back with fake cash from the stands on his return to his boyhood club. A legend at Arsenal he is not.

A stalwart in a Chelsea side that won eight trophies in eight years between 2006 and 2014, Ashley Cole will have felt his decision to move to west London was justified. He was the best left-back in the world when he arrived at Chelsea and remained so despite having to continually alter his game to suit the different philosophies of the multiple managers that came through the revolving door at Stamford Bridge.

He won it all at Chelsea and was a key part of the side that miraculously won the Champions League in 2012 – defending in his typically calm and assured manner, making memorable goal-line clearances against Napoli in the second round and Barcelona in the semi-final.

Ashley Cole has to go to the World Cup. If you’re 1-0 up with 10 minutes to go, and you need a goal-line clearance, he’s surely your man.

Still this does not appear to be enough for Ashley Cole to be counted alongside John Terry, Frank Lampard, Didier Drogba and Petr Cech as a Chelsea legend. Which begs the question…

What does it mean to be a footballing legend?
Any definition of a ‘legendary footballer’ is arbitrary  – but any definition will likely comprise the same key factors. The player will have played at a club with distinction and with a degree of longevity – getting the better of those he played against and bettering those he played with. A legend could be technically brilliant, play with a level of humility and pride, be an outstanding leader, or most likely – incorporate a mixture of those facets.

So why is Ashley Cole not a Chelsea legend?

Did the media’s portrayal of Cole damage his chances of securing legendary status?
Cole was often pictured alongside pop star wife Cheryl Cole, head bowed and expressionless – seemingly shy and unaware of the pitfalls of the life he had built for himself – he was a reluctant celebrity. Cole was targeted by the tabloids; allegations about his infidelity and sex life were damaging. Cole was a victim of media stereotypes of young black men as obsessed with sex and money long before it was highlighted by Raheem Sterling.

But does your portrayed image off the pitch impact on your legacy? Ask ‘Captain, Leader, Legend’ John Terry. His proven, reprehensible off-field acts have done nothing to hinder his legendary status at Stamford Bridge – is it one rule for him and another for Ashley Cole?

Is he a victim of the position he played?
Put simply – yes. It is difficult to be a legendary left-back. There are of course exceptions, but in that position you have to be exceptional to stand out from the crowd. Paulo Maldini was effortless and elegant. Roberto Carlos was skilful and powerful. Ashley Cole did not stand out – but that is arguably what made him so great. He was dependable, without being flashy. You would rarely see him make a last-ditch tackle, though he was more than capable, because he read the game so beautifully. Right place, right time – he made made defending look incredibly simple.

It is perhaps this minimum of fuss that hampers his bid for legendary status.

How many legends is too many?
Was Ashley Cole’s legacy tarnished by the presence of so many other great players around him at Stamford Bridge? Is there a limit on the number of legends in a team at a given time? Are you less of a legend because your teammates are more legendary? Have we now used the word ‘legend’ too many times and it is losing its meaning?

The most successful period in Chelsea history will be most remembered for the contributions of Drogba, Lampard, Terry and Cech – the spine that turned Chelsea from a mercurial team to the side that won everything.

If we weren’t discussing ‘legend’ but medals, they would win gold for their role in Chelsea’s success. Claude Makelele and Ricardo Carvalho would have silver medals round their necks, while Joe Cole, Arjen Robben and Damien Duff would have to settle for bronze.

But where does Ashley Cole stand? He had greater longevity and won more than both Makelele and Carvalho, so is he wearing an alloy of gold and silver? It’s called electrum, metal fans.

The notion of a ‘legend’ in football is a whimsical one; Ashley Cole may indeed be a legend in your eyes, but not in the eyes of everyone.

But does it really matter? We can all agree that he was really bloody good at football.