Home F365 Says Is it time to end the TV blackout? It’s complicated… 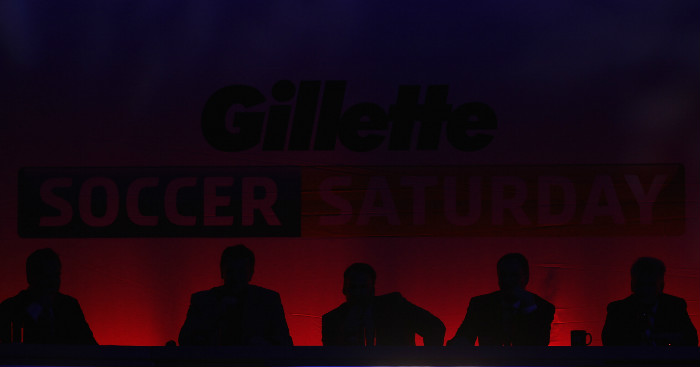 Of all English football’s great many peculiarities – Bovril, Boxing Day games, the enduring popularity of Abide With Me – surely the most strikingly odd to the uninitiated is the existence of the programmes that come on every Saturday at 3pm in which a group of mostly men sit around looking at screen narrating the football.

Final Score, Soccer Saturday, and the frankly appallingly-named BT Sport Score are the only legal means by which you can access anything live with even a tenuous link to football between 2:45 and 5:15pm in the UK.

Frankly, I think it’s a waste to have three programmes doing the exact same thing. Surely there’s a market for having the goals reenacted by cute schoolchildren, or trained dogs in little outfits, or trained pensioners in little outfits. Or get someone who has never seen football in their life to try and describe the goals (admittedly, this would not introduce much variety to what’s currently on offer). Or send poets to the games and to describe the action using only metaphor. Or use the regular pundits, but refuse to show them the games and just have them make everything up as they go along. I would watch any one of these programmes in a heartbeat.

The reason these programmes exist, as we all well know but often find difficult to explain, is because live football cannot be shown in these hours. Appropriately, it is known as the blackout, because watching the uneasy but brave-faced camaraderie of Paul Merson and co always makes me wonder if this is what life was like during the Blitz and you had to spend a few hours trapped in the company of a charmingly irritating uncle.

The idea behind it is to protect attendances at 3pm kickoffs across the country, particularly those in lower leagues. The principle is that if Manchester United were on the telly at 3pm every week, nobody would bother going to watch Rochdale or Bury or Oldham or Accrington.

On the face of it, this seems rather nonsensical, not least because I refuse that believe that any part of the world that has produced such great creative minds as Caroline Aherne, Tony Wilson, and Judy Finnigan could also contain thousands people so lacking in imagination that they can’t think of anything better to do with their free time than go and stand in the freezing cold at Boundary Park, muttering ‘well, it’s marginally better than being dead. I suppose’.

No! Surely those brave, bizarre souls that go to watch Football League games do so because their club has got them firmly in its grip for life, in that peculiar way that only a sports team can. If they were interested in glamour and excitement, they would surely never have chosen to follow Rochdale, a club now in its 98th successive year without winning a single competition.

And yet, since legal streaming services like iFollow became available for midweek evening games not otherwise available on broadcast television, people do seem to have stopped going to those games, apparently opting instead to stay home to watch the games online instead.

Bad news for the @SkyBetChamp – attendances have dropped significantly since all matches were made available to watch live on TV, reports @martynzieglerhttps://t.co/ytSClFLOsy pic.twitter.com/fyyZ39zcQr

Lots of people are very concerned by this, particularly given that online-only Eleven Sports recently decided to simply break the 3pm Saturday embargo –  a strategy they yesterday announced they had walked back on. In much that same way that “ride sharing” businesses have muscled into cities around the world by simply ignoring the rules and hoping to get away with it, there are growing concerns that more broadcasters will soon feel emboldened to do the same. It is a rubicon that many would rather not cross.

The obvious counterargument is: surely the revenues lost in gate receipts can be made up for in the extra money from streaming and red button services, and at a glance those numbers are compelling.

However, dig a little deeper, and you’ll find that – as with anything financial in football – the issue is more about distribution of wealth than the amount of money coming into the league as a whole. If, say, a few busloads of Sunderland fans don’t make the away trip to Accrington, instead opting to stay in Wearside to watch the game at home. Not only would Stanley lose out on the gate receipts from those fans, but the streaming revenues would not go to Accrington either: the lion’s share, at very least, would go to Sunderland.

I don’t use Accrington in this example by accident. Stanley chairman Andy Holt has been especially outspoken on the matter on Twitter, firmly sticking to his guns that the gate money from live attendances is the lifeblood of the smallest club in League One.

Two rules smashed out of the park Rob, without debate:

2. Home club gets the gate in a league match.

These are fundamental to our budgeting and future plans.

No point putting a roof on the away stand when they’ve got one at home. https://t.co/y818NTIZ59

As it stands now, online ticket is half the actual ticket price and more than one person watches a single live stream. https://t.co/X9TXvstNYX

The table tennis game of point and counterpoint would retaliate that this is unavoidable and natural; nobody complains that Sunderland have a huge natural advantage from a large, historic fanbase, recent Premier League history, and by far the largest stadium in the division. Achieving a perfect equilibrium of means is always going to be impossible and, indeed, part of the charm of football.

Ultimately, the issue is that really, nobody knows for sure what will happen if and when an anything-goes approach to live broadcasting takes hold.

What is certain is that there will be particular clubs that would be pretty assured of benefitting, and the broadcasters certainly would. (Incidentally, isn’t it interesting that the owner of the one broadcaster that dared breach the blackout is also the owner of one of the clubs that would most benefit from selling the rights to broadcast all their Saturday afternoon games?) History tells us that when it comes down to money, the TV men and big-boy clubs tend to get their way eventually.

It’s entirely possible that the naysayers who stand up for the continuation of the blackout ultimately turn out to be wrong, and all levels of the game would be enriched by the greater accessibility of live matches. But in the face of those who care little for the soul of the game, it is vital that we pay serious attention to those who have nothing but their emotions invested.