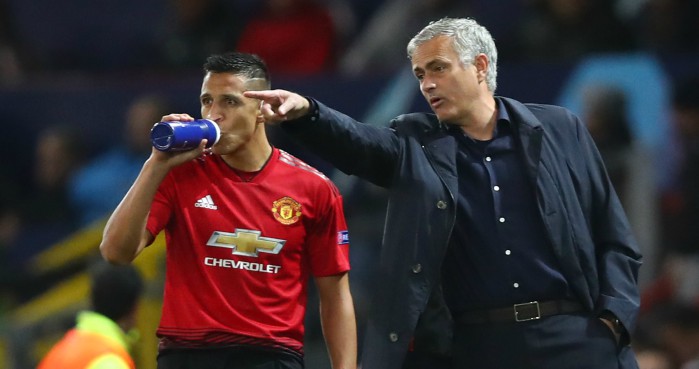 You know what to do. Mail us at theeditor@football365.com. And yes, we welcome mails about other clubs. But you have to write them…

That was a calculated display
I will get grief for being over cynical. Nevertheless, United’s performance was the perfect approach for a squad wanting regime change at their club.

If they had performed like the omni-shambles of the West Ham game, they would have reduced their standing as elite players and potentially endangered their qualification for the Champions League knock out stages. That is the bench mark, apparently, that top-flight footballers crave according to agent talk.

Now, I am not suggesting that Rashford deliberately performed a crossbar challenge to achieve a 0-0; I’m sure the team would have taken a 1-0. It does leave Jose, however, with a poor home record this season. As for the players: a bit more pressing, the occasional flashes of their ability and, Bob’s your uncle, Scholes et al are saying they are decent players, but something is still not right.

Defeat against Newcastle, in a league where they could comfortably finish in the top four despite being 10th, and everything is back on the management.

So, 2-1 to Newcastle. Jose goes. A decent chance at knock out stage Champions League, the FA Cup and top four attracts a progressive manager, and the players get their wish without the chore of moving clubs and all the negotiations that brings.

Of course, the Glazers could throw in the curve(money)ball and appoint Big Sam.
Stu, (United since 1976), N Yorks

Mourinho becoming a specialist in failure
I must admit it’s fun watching Mourinho become everything he said he hated about Wenger, but not carrying it off with an atom’s amount of class like Wenger did.

He is now the voyeur of the league, watching other managers win when he can’t, he is now the specialist in failure At least Wenger had a squad that had some deficiencies and wasn’t one of the most expensive in the world. Wenger at least had some class even when everything was going wrong.

There is an old saying, be nice to people on the way up as you will meet them on the way down. Mourinho may blast past them so fast on his way down they may not notice him, but it’s nice to watch his fall. I must admit I don’t normally like to see someone get fired or go through hell, but I will make an exception in his case.
Wade (I even feel sorry for Man u fans right now) Gunner 4 life

Noodles?
Good morning. I am sat on my holidays doing nothing much and got wondering.

Off the top of your head can you actually name Man United’s famed noodle sponsor. I can’t, and I often reference them in mails.

Bantz
I don’t know why all these United fans are getting themselves all het up; you are clearly far too good to go down!

But then they said that about Forest and Leeds so… As you were United fans. Don’t suppose they would be kind enough to let him cling on until we play them and give us the opportunity to hammer the final nail in the coffin…
Gregory Whitehead, LFC

…Can’t believe Mourinho didn’t play Sanchez again in what was an important game for the club.

What! he did!
Neil, LFC, Malta

I came to read, not to feel
‘…this is now the office five-a-side team where all of the original players have been replaced as regulars by friends of acquaintances. All sense of togetherness has been lost, every bond broken. These are strangers simply wearing the same colour shirt, trying to work out everyone’s name and who invited them.’

Thanks guys. I spent a solid 10 minutes blankly staring out the window and contemplating life after reading that. Way too close to home.
Matt Wright, Gunner in Aus

So very biased
F365’s response to Man United’s brave performance again Valencia proves, beyond doubt, that they are biased against the club and particularly the manager.

Can’t you see what he’s building? He needs at least another five years and £2bn to make a decent hand from the terrible cards he was dealt. Shame on you.
Aidan, Lfc (We’re going to lose against Napoli now, aren’t we?)

Where are all of you getting this utter tripe?

From the own goal the defender scored against Australia?

Unbelievable how in this modern world being a total sheep is the ultimate prize.

So many “individual” thinkers these days that every single one of you sound exactly the same, nervously glancing left and right to ensure your absolute submission to mainstream opinion on everything is still 100% in synch.

It’s the same reason why the mailbox looks entirely different to ten and 15 years ago…can’t submit anything that everyone else hasn’t already agreed on.

He scored a goal at the second attempt after his first shot was blocked.

Oh wow. And he actually showed some respect to his team, for a a very short time, and suddenly you all act like he always plays well and always has for France?!

I guess that explains why he felt it acceptable to have his family carting around the World Cup trophy before Kante could even touch it.

Blame the whole world, especially Mourinho, except Pogba for everything he does not contribute through lack of effort or because he is just totally overhyped…what a thoroughly modern demand of society.

Cue the mails about his time in Italy. Because that’s an accurate comparison and no player has ever thrived in Italy and flopped in England right, because as I said, the logic is direct comparisons there is just so very strong isn’t it.

He clearly needs the extra few seconds to look amazing so let him go get it in a totally dominant team, not a surprise at all to hear him linked with Juve and Barca.

Toughest challenges week in, week out? He could easily just have some appetite to fulfill his word about winning trophies in his second stint, and please, the trophies that matter to this mailbox, whose contributors frequently deride ‘big’ teams for Europa football as an example.
Manc (so sick of the hysterical fawning over a contribution which never took place)