Home F365 Says Is the Premier League ready to fall for Jack Grealish? 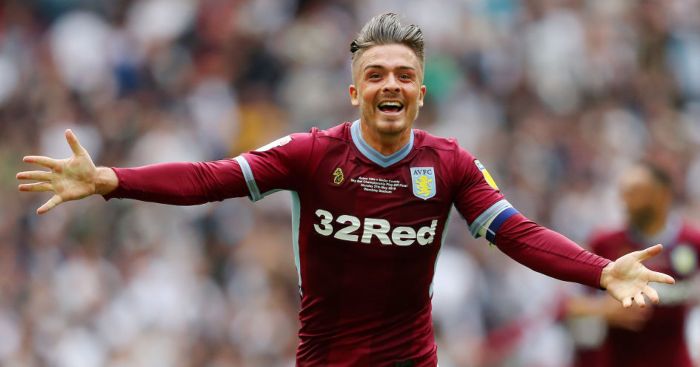 One passage of play prevented Aston Villa’s season from dying. A goal down at home to West Brom in the Championship play-off semi-final, Jack Grealish received a John McGinn pass on the edge of the box and knifed back into the area. Seconds later, the move ended with Conor Hourihane’s equaliser. It’s what mattered, it’s what everyone remembers now, and – more importantly – it gave Villa fresh impetus in a play-off tournament that they would eventually win. But the chief architect was their captain.

In August he’ll return to the Premier League. It’s a relatively unusual situation, because top-flight clubs are ordinarily so quick to snatch talent away from the Football League. Some are suspicious of the false economy and wary of the long list of players who have burnt through the Championship’s stratosphere only to fail at the level above. But Grealish is no David Nugent or Sylvan Ebanks-Blake and, really, it’s a wonder that nobody took that risk.

Perhaps it’s because they remember him as he was: the raw, wispy player who was relegated with Villa in 2016. Maybe those clubs were reluctant because of the person, the slightly mischievous teenager whose nightlife was reported as scandal. It was confected silliness – beers and laughing gas, women, and a young man growing into celebrity – but this is a risk-averse world and even a few benign anecdotes are enough to plant a red flag.

Back to that move, though, and the assist for Hourihane: that was a sequence as instructive as it was startling. For those who have lost track of Grealish over the past few years, for anybody distracted by the Premier League’s glare, that is the piece of play to watch. Not him, not the ball, but the displacement it created. Three West Brom defenders tracked him initially, drifting out of position and leaving space where it’s not supposed to be left. Then, with a twitch of his ankle and a shake of his hips, Grealish attracted a fourth defender. And then a fifth, as Ahmed Hegazi became distracted enough to lose sight of everything around and behind him.

The result, of course, was that Hourihane was left entirely alone on the edge of the box, in a position from which he and his left foot are most dangerous. A player’s ability can be measured in all sorts of literal ways, but the most subtle is that habit of rippling fear through a defence, causing it to lose its collective mind. Hourihane – there? Alone? It’s not quite an unmarked Alan Shearer on the penalty spot, but it’s contextually similar.

Watch it. Watch it again. As a show of respect, it’s quite something. Supporters are prone to exaggerating the effect of players, particularly their own, but it’s hard to argue when it’s reflected that clearly on the pitch. Had a press photographer been more fortunately positioned, those split seconds might even have been afforded a proper Maradona against Belgium-style frame. Alas not, but it remains a vivid description of just how influential Grealish had become by the time he was preparing to leave the Championship behind.

He was also a spectacle. It’s not original to describe him as a man out of time, but that’s really what he is. Yes the socks, yes the hair, but also that habit of receiving the ball at a standstill, inching towards a defender and then flowing right past him. Not with a clever trick or some button-bashing combination from a video game, but with pure, evergreen, ball-carrying skill. Grealish is all balance and teasing touches, and those are abilities which people have found infectious since the game began.

So that’s what draws you to him; that’s what gets you to watch. Spending time at Villa Park is also seductive. It remained one of the great theatres of English football even in the second tier – William McGregor reminds you of that on your way in – but the mood seemed to change when Grealish was in possession. Again, that’s a commodity that football’s evolution can never take away.

He isn’t a flying winger and he doesn’t cause seats to snap shut by charging down the flank, but he quickens the local pulse in a way that the gifted always have and always will. Villa were not particularly impressive for the first six months of the season. They were actually a muddle around the Steve Bruce-Dean Smith changeover. So through Autumn and early Winter, before his injury, Grealish’s involvements were as warming as a change in weather. It was a pleasure to watch.

On any given weekend, Birmingham New Street is the arterial centre of the nation’s football traffic, meaning that reporters on the way out or on the way home could catch the odd Villa game, watching from the press box with no match report to write. Instead of wondering what you’d learnt or assigning arbitrary marks out of ten, there was a chance to actually sit and enjoy the football: the game, the players. Grealish. Ordinarily the task is to snatch at little facets of the game, extrapolate them into an absurdly grandiose conclusion, and then leave having watched about thirty minutes in total and gathered some pointless quotes. It’s charlatanism and it amounts to a very two-dimensional experience.

But it’s in that full, third dimension that Grealish reveals himself. It’s also what offers an optimistic answer as to how he’ll fare in the Premier League. Much of that, of course, will depend on how Villa prepare for the new season. Tammy Abraham has returned to Chelsea, while Tyrone Mings and Axel Tuanzebe are yet to be signed on a permanent basis. McGinn and Hourihane are in place and Anwar El Ghazi’s future has been confirmed – that’s important. But Grealish’s impact will be determined by what the club are able to build around him.

And that’s because he isn’t actually the player he’s presumed to be. He isn’t a soloist, not a head-down, take-on-everybody, circus act. He will always be associated most with the flair and smooth dynamism, but underneath lies a lively set of playmaking attributes. He’s an excellent passer of the ball, he sees angles and opportunities that most players of his style don’t, and – actually – there are times when he’s too reticent in trying to beat players, when he should be much more selfish. That’s the misconception: that he hurts opponents in one way and one way only. It’s certainly the trap West Brom fell into during that Hourihane goal; of course Grealish was going to see that pass.

There are deep, creative tones to his game. They may not manifest in dozens of assists per season, but they’re visible in the volume of general attacking moves he begins and alters. Sometimes it’s the creation of a mismatch somewhere else on the pitch, more often it’s a pass snuck between a line. Occasionally, when his finest skills are in perfect harmony, the results are mesmerising: think of Albert Adomah’s goal against Birmingham at Villa Park and the craft in its initial mechanics. Or the precise, perfect weight of the setting-ball for Hourihane’s goal against Barnsley. There aren’t many players who possess that kind of breadth; they might be able to beat defenders and see passes, but rarely in a way that makes the game look so uncomplicated.

So his adaption and reintegration into the Premier League will be fascinating to watch. There are too many variables to make (meaningless) predictions, especially in June, but whatever else Grealish may be – a spectacle, a crowd-pleaser, a reason to buy a ticket – there’s a fertility about his game. It is present in his imagination, his technique, his confidence, and suggests that playing at a higher level will only nourish him. An England future and a career spent under the sun beckons.