Home Mediawatch Is there any point in Man United actually playing tonight? 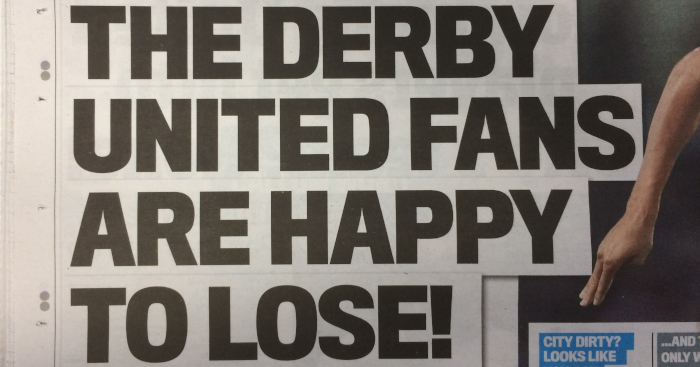 Hey, at least you aren’t claiming they’d rather be relegated than win. That would be silly.

Pep talk
As good as this Premier League season has been, some may be aggrieved at the lack of MIND GAMES. Pep Guardiola and Jurgen Klopp seem more likely to shake hands and share thoughts on football, politics and different cultures than trade public barbs from afar.

So when Ole Gunnar Solskjaer offered some potentially incendiary thoughts in his pre-match press conference ahead of the Manchester derby, it was to be expected that Guardiola would be asked for his response. And you can watch that in its entirety below.

Far be it from Mediawatch to suggest otherwise, but none of the following seem to describe either his answer or his demeanour:

‘When told about his rival’s comments, City chief Guardiola raged…’ – The Sun.

‘Pep Guardiola was furious with Ole Gunnar Solskjaer’s suggestion that his Manchester City side are instructed to commit ‘tactical fouls” – Metro.

‘The war of words continued with the former Barcelona and Bayern Munich boss responding angrily to his United counterpart’s claims’ – Daily Mirror.

He looks positively seething. But we have one question: did he actually shout the word ‘that’?

Foul play
Some outlets dig a little deeper into Solskjaer’s comments, as they should. But many barely scratch the surface before declaring a job well done.

‘Solskjaer’s claims are thought to have angered City’s hierarchy too,’ writes Paul Hirst in The Times. ‘Some City officials were bemused that United’s staff had not supplied Solskjaer with any statistics to back up his claims.’

So they have presumably supplied you with the statistics to refute them.

‘Indeed, some of the figures appear to undermine the Norwegian’s argument. Excluding offsides, United have given away 195 free kicks in the opposition half this season compared with City’s tally of 170.’

‘City’s disciplinary record is much better than that of their neighbours. City have been shown 38 yellow cards this season, almost half United’s total of 64. United have committed 395 fouls compared with City’s 291, which is the fewest in the Premier League.’

Crikey, those are some impressive context-less numbers.

‘According to Opta, City have conceded 170 free-kicks, excluding off-sides, in the opposition half so far this season. In contrast, United have conceded 195.

‘In addition, City have amassed 38 yellow cards and one red in the Premier League this season – for United, the figures are 64 and four.’

The Daily Mirror are it too…

‘United have received 64 yellow cards in the Premier League this season, compared to City’s 38.

‘They have four red cards to the champions’ one, and have committed 395 fouls compared to 291 by Guardiola’s men.’

As are The Sun:

‘Guardiola’s Treble-chasers have picked up 38 yellow cards this season, compared to 64 for United.

And the London Evening Standard:

‘City have recorded the fewest fouls per game in the Premier League this season, with an average of 8.6, compared to United’s 11.2, which is the second highest.

‘United have also conceded 195 fouls in the opposition half, while City have recorded 170.’

That Opta press release was certainly put to good use, wasn’t it? It’s just a shame that City literally commit more fouls per minute out of possession than any other Premier League side, and have a higher percentage of fouls in the opposition half (Solskjaer’s actual legitimate point) than all but two clubs.

Those ‘City officials’ will be ‘bemused’.

Private eyes
‘Privately City are understood to be surprised at Solskjær, the view being the United manager has failed to do his homework regarding the regularity of the fouls’ – Jamie Jackson, The Guardian.

‘Privately, City are bemused at United letting Solskjaer speak about the issue, mainly because the statistics do not back up the Norwegian’s view’ – Simon Stone, BBC Sport.

‘Privately, City are bemused as to why Solskajer was not given the stats before he came out with his comments yesterday morning’ – Neil Custis and Martin Blackburn, The Sun.

‘Privately, City were understood to be bemused by Solskjaer’s claims given the statistical evidence to the contrary’ – James Robson, London Evening Standard.

Way to keep a secret, guys.

Rubstep
‘The gulf in class is evident by the 22-point difference between the local rivals and could well be rubbed home on the pitch at Old Trafford tonight, too’ – Neil Custis, The Sun.

What on earth does it mean to ‘rub something home’?

On second thoughts, don’t answer that.

OK, supercomputer
Quite why the match is actually going ahead is beyond Mediawatch. You see, the Daily Express have ‘revealed’ how the Premier League table will finish, and thus the result of Wednesday evening’s game. How kind of them.

‘Football Web Pages have crunched the numbers in their supercomputer, using a unique algorithm to try and predict how the remaining games of the season will pan out,’ they say.

How surprising that the two best teams in the country would both be predicted to win their remaining matches, with neither City nor Liverpool even conceding a goal. It’s almost like these things can only ever be based on form and nothing else.

But we’re a little confused. Weren’t Liverpool supposed to be breaking the Premier League points record en-route to the title?

Thank you, NEXT
‘United boss Solskjaer admits he has already written off NEXT season’ – Daily Mirror.

…in terms of winning the title. Although he did actually add that “you can never say never”.

‘Man WILL do job despite previously also doing job’

Recommended reading of the day
Barney Ronay on the Manchester derby.