Home Tottenham Hotspur Is this Poch’s biggest Spurs challenge yet? 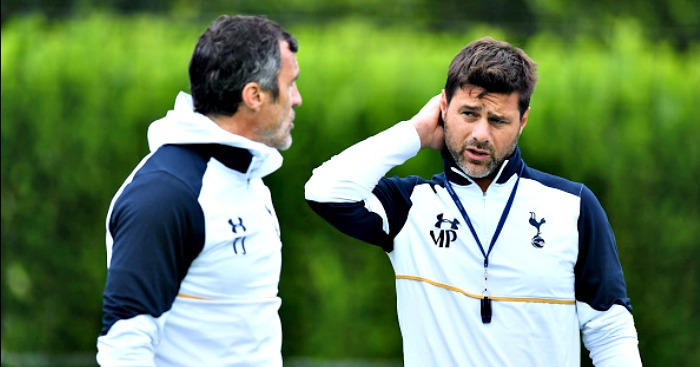 When the new Premier League season begins in little under a month’s time, each team will face varying degrees of pressure. Leicester must perform under the stress of defending their title. Five clubs will embark on their respective journeys into the unknown, having changed managers this summer. A further three bosses will begin their first full season in charge after being appointed midway through the last. The three promoted sides will be billed as the underdogs, but must acclimatise quickly to their new homes. Tottenham? Tottenham might just face the biggest challenge of them all.

In the aftermath of a tumultuous, dramatic and historic 2015/16 Premier League season, the north London side emerged as the outliers. Every other club could define their season with a single word or phrase. For Arsenal: Frustrating. For West Ham: Wonderful. For Stoke: Same old. For Chelsea: Write-off. For Palace: Mixed. For Bournemouth: Progress. For Newcastle: F*** McClaren.

Not so for Tottenham. In true Spursy fashion, they managed to combine their highest-ever Premier League placing with their most disappointing campaign yet. Mauricio Pochettino led his players into a two-horse race for the title against an unfathomable opponent, and managed to finish third behind their most bitter rivals. For 34 games, Spurs were the effervescent challengers, scoring the most goals, conceding the fewest, and threatening the Leicester fairytale. Their final four fixtures undid all their positive work. Two draws and two losses, culminating in an almost parodic 5-1 defeat to relegated Newcastle. Such a capitulation made it difficult to characterise their season as a whole. Glorious disappointment? Magnificent failure? Sublime disaster?

If Tottenham’s Premier League season was a long and enjoyable session of drinking curtailed by a fight with the bouncers after being refused entry to the final club of the evening, the subsequent summer months have been the taxi home in which each player has soiled themselves, before the abrupt hangover the next morning. Pochettino patted 11 of his charges on the back and wished them luck ahead of the European Championships; ten will return to White Hart Lane demoralised even further, including five Englishmen and three of the club’s Belgian contingent. Another – Kevin Wimmer – played just three minutes of the tournament, exiting at the group stage with Austria, while Hugo Lloris tasted yet more bitter disappointment in the final on home turf. With Erik Lamela’s Argentina suffering heartbreak of their own in the Copa America Centenario final on penalties, only Wales’ Ben Davies emerges from this summer having found an international remedy to last season’s club anticlimax.

That, coupled with findings from a recent study which claimed Tottenham players registered over 900 more minutes at Euro 2016 than any other Premier League side, attest to the growing difficulties now facing Pochettino. Expectations at the club have been raised after the Argentinean has taken them from sixth to fifth, and now to third, but is such progress sustainable? Each of their rivals have reacted to below-par seasons; the three sides directly beneath them – Manchester City, Manchester United and Southampton – have all installed new managers, and have been among the busiest clubs in the transfer market.

When Tottenham line up to face Everton on August 13, the ghosts of last season, of West Brom, Southampton and Newcastle will linger. The 2-2 draw with Chelsea, which handed Leicester the title, was the most damaging psychologically. “I hear in the last two years always people say ‘Tottenham was soft’. But now we start to show character,” Pochettino said after that game at Stamford Bridge. Nine Tottenham players had been booked. Jan Vertonghen, Eric Dier, Moussa Dembele, Christian Eriksen and Harry Kane among them, the quintet who had provided much of the spine of these unlikely challengers, unravelled for the first time.

The effects of that game cannot be underestimated. This was an eruption of emotion, an outpouring of grief and frustration, from a collection of players who, before then, and even when leading 2-0 in that very game, had been consummate professionals. “Maybe we crossed the line, I can recognise this, I am not stupid,” Pochettino admitted in the aftermath. “It is important to manage better our energy for the next season and ensure we learn a lot about this game.”

Lessons, presumably, will commence now. Because it did not appear that Harry Kane had learned any particular lessons as England’s worst outfield performer at Euro 2016. Nor Dele Alli, who was visibly weighed down both figuratively and physically. Or the previously imperious Toby Alderweireld, who looked a notably different player under Marc Wilmots. Tottenham’s five English players featured heavily in an embarrassing campaign, their three Belgians were members of the team so heavily scrutinised after losing to Wales, and Lloris was captain of a hosting side which froze on the big night. The mental and physical exertions of these players should not be underestimated.

If anyone is equipped to help them exorcise their demons, it is Pochettino. But he must start the season without the injured Vertonghen, while a suspended Dembele misses the first four games after his personal meltdown during the Battle of the Bridge. Both players played 29 league games last season, and will be huge losses.

The manager, to his credit, has kept busy. Our transfer guide identified the club’s two main priorities – ‘competition for Kane up front and in central midfield’ – and both already have a tick next to their name. Vincent Janssen and Victor Wanyama are shrewd additions for a combined £28m, and the 22-year-old and 25-year-old fit the Pochettino mould perfectly, adding youth, European experience, talent and depth to the squad. More importantly, they provide a fresh touch to a core of shellshocked players.

The two new arrivals also continue Pochettino’s overhaul of the playing squad, which began upon his appointment in 2014. A total of 53 players have either signed or been sold on permanent deals in two years; only Manchester United (55) have been busier. And they have had two managers in that time. After the reign of Redknapp, the demise of Villas-Boas and the brilliance of Sherwood, the current boss is overseeing a mini-revolution of sorts at White Hart Lane.

But the task that lies ahead of him is his most difficult yet – to continue to implement a new mentality and identity of success, not failure, at the club; to oversee the development of a supremely talented but now damaged group of young players; to stop Tottenham being quite so Tottenham. And to do all of that while shouldering a weight of expectation which has now seen these players collapse twice in the space of mere months. No pressure? For Pochettino and his players, it is quite the opposite.