Home Cheeky Punt Is this really a ‘tricky test’ for Liverpool? Nah. 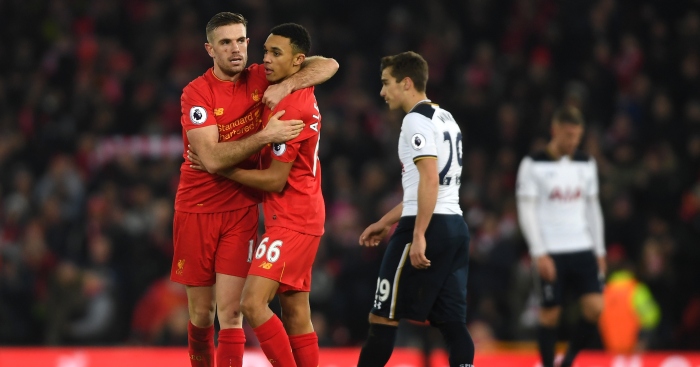 Fulham v Manchester City
Pep Guardiola’s side continue their quest for an historic quadruple this weekend when they head to Craven Cottage for Saturday’s early kick-off. I get most of my exercise these days just from shaking my head in disbelief. And I can barely believe Raheem Sterling is 9/2 to score first against the Cottagers. He’s scored eight in his last five games for club and country. Bang. In. Form.
Betting: Sterling to score first at 9/2 (bet365)

Brighton v Southampton
South coast derby time once again this weekend and one cannot ignore the fact that Brighton have lost just one of their last five matches. In the immortal words of Dexy’s Midnight Runners… Too-Rye-Ay.
Betting: Brighton to win at 8/5 (888 Sport)

Burnley v Wolves
Four losses off the belt have left Burnley with major problems again down near the foot of the table while Wolves have lost just one of their last 12 matches. I could literally watch Diogo Jota every week (provided he came to Hartlepool United on a free).
Betting: Wolves to win at 6/4 (888 Sport)

Crystal Palace v Huddersfield Town
The game is up for the Terriers, who are 1/2000 to go down now with bet365. That’s roughly the same price as Tuesday following Monday. The Eagles have been pretty slapdash at home but can be trusted to claim a precious three points here and put clear daylight between themselves and the bottom three.
Betting: Crystal Palace to win and both teams to score at 33/10 (888 Sport)

Leicester City v Bournemouth
The Foxes have hit eight goals in their last four matches and the decision to recruit Brendan Rodgers is looking more and more shrewd with every passing week. James Maddison scores his first goal since early December last time out (a cracker) and the youngster is a 15/2 poke to score first at the King Power.
Betting: Maddison to score first at 15/2 (Betfair)

Manchester United v Watford
The Hornets have come unstuck on their travels against the big boys this season and it’s hard to see past a United victory here. Two away defeats on the trot before the international break dimmed Ole’s sparkle somewhat but they should get the job done here despite facing a potential injury crisis in attack.
Betting: Manchester United to win & Under 2.5 goals at 3/1 (Betfair)

West Ham v Everton
The Hammers have won six of their last nine at their new HQ and home advantage could be crucial here. Everton, a team Paul Merson once deliciously described as ‘literally a bag of Revels’ have lost eight of their 15 away games already this season.
Betting: West Ham to win at 8/5 (Betfair)

Cardiff City v Chelsea
Cardiff are odds on for the drop but not without hope given they sit just two points from safety. The Bluebirds were excellent in beating West Ham the other week and can claim a share of the spoils here, with Chelsea’s away form under Maurizio Sarri still a worry.
Betting: Draw at 7/2 (Betfair)

Liverpool v Tottenham
Game of the weekend, on paper at least, takes place at Anfield where Liverpool face what should be a tricky test against Spurs. But will it be though? Like, really? Spurs have claimed just one point from their last four league games and have lost to Burnley, Chelsea and Southampton away from home in recent weeks. Liverpool are unbeaten in 15 Premier League home games and should get it done here to keep the pressure firmly on their title rivals from Manchester.
Betting: Liverpool to win and both teams to score at 43/20 (888 Sport)