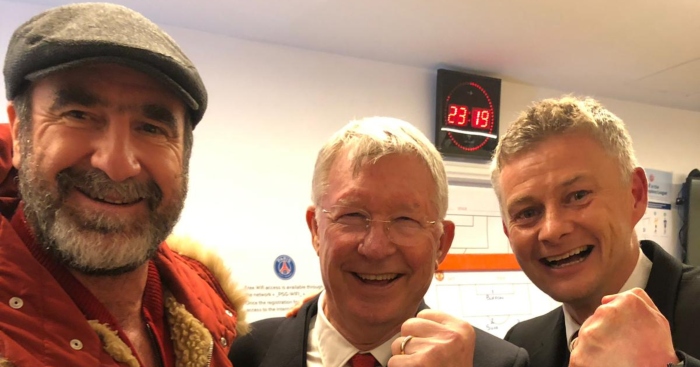 Rating room
Mediawatch can vaguely forgive The Sun – who use WhoScored.com to power their meaningless match ratings – for not giving any Manchester United player a lower mark than 5/10 against Manchester City.

But the Daily Mirror benefit from no such excuse. David de Gea endured ‘a forgettable night’. Victor Lindelof was ‘exposed’. Fred displayed ‘so little creativity you have to wonder if he is Brazilian’. Andreas Pereira’s own goal ‘perfectly summed up the standard of his night’. Jesse Lingard ‘always looked at least half a yard off the pace of the game’. Phil Jones was Phil Jones.

Yet the lowest mark any player is given is 5/10. Which makes the universally accepted (but weird) rule of every player automatically starting on 6/10 look ridiculous.

The Manchester Evening News have it absolutely right, handing out two 1/10s, three 2/10s and four 4/10s. If you’re going to do it, do it properly.

Fright club
That offers an insight into just how well the United half of the MEN took this defeat. ‘Some Manchester United players cannot survive this latest shambles’ is the most damning of their numerous headlines.

Go on, Samuel Luckhurst. Lay into them:

‘Some players’ United careers cannot be allowed to survive and the manager might not long-term, either.’

It feels like an awfully long time since ‘the Manchester United moment that should frighten Liverpool FC,’ doesn’t it?

Yet it is just ten months since ‘Sir Alex Ferguson, Ole Gunnar Solskjaer and Eric Cantona were stood side by side clenching their fists and sporting Cheshire Cat grins’. Ten months since ‘the announcement United are back’.

Ten months, folks, since this:

‘Opposition supporters must look at the picture with dread and think, ‘Oh, f**k.”

Hard ‘nock life
At around 9am on Wednesday morning, one trending topic on Twitter looked entirely out of place alongside Iranian ballistic missile attacks and crashed aircrafts. Neil Warnock with a live talkSPORT microphone is much more worrying than a potential third World War.

When not describing Jack Grealish as “a horrible little so-and-so when you’re playing against him because you know that as soon as somebody breathes on him he’s gonna go down,” he busies himself discussing Manchester United’s title prospects.

“Well, you’re not going to see it in the next five years, I don’t think,” he says of them winning the Premier League any time soon. “But I think – I know it sounds silly – but I think it’s gonna take that long. And I do think the only way they are gonna get back in is what they’re doing.”

Did you watch the game last night, Neil? Or the previous one when they didn’t have a single shot on target against Wolves? Or the one before that when they lost to Arsenal?

Fifth place is by no means a disaster whatsoever, but they are closer in terms of points to 10th than fourth. Their players are getting worse. Their coach often looks out of his depth. Those above him in the boardroom are inept. In what world is the current regime “the only way” they are going to challenge for the Premier League title again?

“It’s by bringing in the best young players. Like the lad from Palace, they paid a lot of money for him. But start, like, bringing those players in. James – as soon as he gets the ball, something’s gonna happen, he’s gonna create something. And that’s the type of player you need.”

Aaron Wan-Bissaka – to give him his actual name – has been decent. Daniel James has fallen away somewhat after a brilliant start. Both are solid players. But “the best young” ones? Hmm…

Solskjaer has won less than half of his 61 games in charge. They have won 14, drawn ten and lost eight of their games in all competitions this season. That is not very good. But apparently it is “the only way they are gonna get back”.

All roads Leeds to nowhere
Warnock was also railing against one of his former clubs. How did Leeds resist the temptation to just lump the ball into the box for the final 10 minutes against Arsenal?

Lads, lads! Warnock and Brazil on talksport chatting about #lufc v Arsenal game. Absolutely aghast that in the last 10 minutes Leeds didn’t pump it forwards to get it in the mixer. Laughing that a free kick wasn’t put straight into the box. Amazing.

“It’s not rocket science,” Warnock laments. But what he neglected to mention was the 11 goals Leeds have scored from the 81st minute onwards in the Championship this season – only West Brom (13) have managed more.

Those late goals have earned them wins over Brentford, Barnsley, Luton, Reading and Birmingham, as well as two draws against Preston. And they were scored by following Marcelo Bielsa’s style until the final whistle, not completely disregarding everything he has coached them to stick their centre-halves up front and lob it forward.

Mind you, Warnock is of the belief that “Fulham’s got the best squad” and “Brentford have got the best strikers”. West Brom and Leeds, ten and nine points ahead of both respectively, “have just been consistent”.

“In a good season, I still think they’re both sort of, not run of the mill, but mid…I don’t think they are top of the league, if I’m honest.”

Nothing to do with both having better managers then?

In for the Kyl
Over at the Liverpool Echo, they are continuing to flog a horse that was turned into glue an absolute age ago. ‘Kylian Mbappe, Curtis Jones and how Liverpool could really look in five years time’ is their apostrophe-defying headline that sits snugly below their top story of a live blog.

Yes, that is the same Kylian Mbappe that Jurgen Klopp recently referred to as “too expensive for us”.

Yes, that is the same Kylian Mbappe that Jurgen Klopp recently said Liverpool had “absolutely no chance” of signing.

“Sorry for killing that story!” Klopp added last month. If only…

Anyway, back to ‘Kylian Mbappe, Curtis Jones and how Liverpool could really look in five years[‘] time’. Pray tell how this wonderful club is maintaining this level of dominance for at least half a decade, long enough to sign a probable Ballon d’Or winner at his peak from a club hardly in need of the money.

Are the Liverpool Echo implying Rhian Brewster would start ahead of the benched Kylian Mbappe in 2025? pic.twitter.com/BYefzR4knL

What follows is 919 words across 29 and a half paragraphs before the first mention of Mbappe – the literal first subject of the headline and URL – is even made.

‘Rhian Brewster may also be a cornerstone too at the age of 24. Liverpool have been linked with spectacular moves for Kylian Mbappe and Jadon Sancho in recent months, though,’ we are told.

Even better is that Mbappe is referenced just once more in the entire story: to say that his cost ‘could be prohibitive’. Honestly.

Still, you crowbarred him into your headline and got your clicks before concluding that 2020 and 2025 will definitely share one thing in common: Liverpool won’t be signing Kylian Mbappe.