Home Mediawatch Is this the strangest rant at Unai Emery’s Arsenal ever? 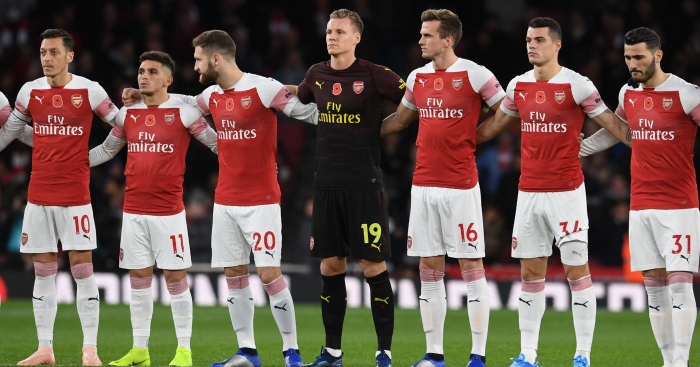 Not on the same page
Mediawatch hopes Charlie Wyett was sitting between The Sun’s Chief Sports Writer Dave Kidd and Chief Football Reporter Neil Ashton on Thursday night at Wembley. While Kidd was writing that ‘the occasion was more weird than wonderful’ and that ‘on balance it probably did more harm than good’, Ashton was declaring with utterly predictable hyperbole: ‘WHAT a way to send the boy off.’

And while Kidd was decrying Rooney’s England career as ‘ultimately unsatisfying’, Ashton was tapping away about an ‘eventful, colourful and ultimately successful career’. Mediawatch does not know what to think.

But if Wyett really was sitting between the pair, Ashton should probably have nudged him to give him the heads-up that he was going to describe Fabian Delph as ‘exceptional’; it might have prompted Wyett to award the Manchester City man more than a measly 7/10.

And on Friday he is being ridiculously negative about Brazil’s policy of playing many of their international friendlies abroad.

Now quite why he is so invested in the plight of Brazilian fans who might want to watch their country play international friendlies is anybody’s guess at all. We wonder if even he knows.

‘The world’s most successful international football team is up for sale, pimped out to the highest bidder as part of a cynical marketing strategy.

‘All that heritage, the history behind the five stars sewn onto those iconic club jerseys, has been flogged off at the expense of their fans watching back in Brazil.’

Has he asked them how they feel? Perhaps they’re not too fussed. After all, international friendlies are generally a bit lame. Unless they are used as a send-off for Wayne Rooney, of course. And there was definitely no cynical marketing involved in that decision.

‘With the exception of their World Cup qualifiers, Selecao have not played in front of their own supporters in Brazil since beating Colombia 1-0 in Rio back in January 2017.

‘It ended a near three-year wait to watch them play an international friendly in the motherland.’

A ‘near three-year wait’ that featured an actual World Cup being played in Brazil, by the way. And then six World Cup qualifiers, the last of which was watched by 53,490 supporters.

But of course it was an international friendly that those Brazilian fans were so desperate to see, which is why only 18,695 fans rattled around a 46,831-capacity stadium to watch that eagerly awaited clash with Colombia.

Two months later, Brazil returned to ‘the motherland’ to play Paraguay in another World Cup qualifier and were watched by 45,000.

It’s almost like the only person who really gives a shit about Brazil playing international friendlies outside Brazil is a pasty-faced bloke in London who had a weekly column to write during the international break and no time to write more about England.

Shirt shrift
We would like to move on from the bizarre anger of Ashton (who has ‘the inside track on football’s big stories’, remember) but when he finds space in his column for a rant about Unai Emery’s failure to impose the Arsenal tradition of a captain choosing long or short sleeves, we have no choice but to, well, wonder what the hell is wrong with him.

‘Unai Emery has made a solid start to life at Arsenal – but some of the club’s quaint traditions have escaped him.’

Solid? They are unbeaten in 16 games, fella. But of course the football is inconsequential to the serious business of shirt sleeves. Go on…

‘Historically the captain on the day chooses whether the team wear short or long-sleeved shirts but Emery’s players have been bending the rules of late.

‘Rob Holding was the only outfield player to fully respect the tradition, wearing a short-sleeved shirt for the disappointing 1-1 draw at the Emirates.’

Mediawatch barely knows where to start with this but we would firstly like to direct your attention to the top of this page, where there is a picture of Ozil and some of his teammates taken at said match against Wolves. Now, Ashton was not at that match so might be forgiven for getting this wrong, but he could have – and this might blow his actual mind – looked it up. Like we did.

Ozil is clearly wearing a long-sleeved white base-layer underneath his traditional red and white jersey. So the majority of players did actually follow his lead.

‘…but this unwritten code of conduct is such an endearing part of Arsenal’s history that the club should take steps to maintain it.’

Is there no unwritten code of conduct for journalists? We find accuracy and basic fact-checking kind of endearing…

Message on a bottle
But are Arsenal’s sleeves the biggest story in football? Hell, no. By 10.30am on the morning after England’s 3-0 win over the USA, The Sun online are leading on this:

2) You cannot expose something that is not a secret.

4) He didn’t actually face a penalty so it is entirely irrelevant.

Still, it was definitely worth sending four well-paid sports reporters/writers to Wembley only to disregard all their thousands of words in favour of a picture of a drinks bottle.

Definitely not on the same page
Martin Samuel, Daily Mail, p90: ‘Less successful was Michael Keane, who was caught out on a couple of occasions and almost let in Christian Pulisic for a goal against the run of play.’

Sami Mokbel, Daily Mail, p91: ‘Dealt comfortably with what the Americans threw at him. Cruised through his international return.’

Mark my words
Martin Samuel writes at length and with some authority in the Daily Mail about the hypocrisy of bookmakers, but then cannot resist a dig at Marko Arnautovic in that way that only a West Ham fan can.

‘On his day he is a match-winner; on others, he spends a lot of time blaming his team-mates and failing to convert good chances.

‘If Arnautovic was clinical, West Ham would almost certainly not be toying with relegation and might even be looking at a place in Europe.’

Marko Arnautovic has scored a Premier League goal every 163 minutes this season, which makes him more clinical than Harry Kane, Alexandre Lacazette and Romelu Lukaku.

We don’t think it’s his fault that West Ham are not pushing for a place in Europe, fella.

Did you see? Did you?
Daily Express man James Benson has a couple of questions for you:

‘Did you see where Jose Mourinho was spotted last night? Man Utd boss on scouting mission’

‘Eden Hazard: Did you see what Chelsea ace did during Belgium vs Iceland on Thursday night?’

We have a question of our own:

Is this the ‘New Thing’? We hate it already.

No coincidence that Premier League clubs voted for VAR on the same day they decided to hand a multimillionaire the equivalent of 327 years on the national living wage as a leaving gift… 🤷🏻‍♂️https://t.co/cHPRLGerUV https://t.co/3yYDZcvzp2

They only meet four times a year, fella; they will quite often decide two or more things on the same day.