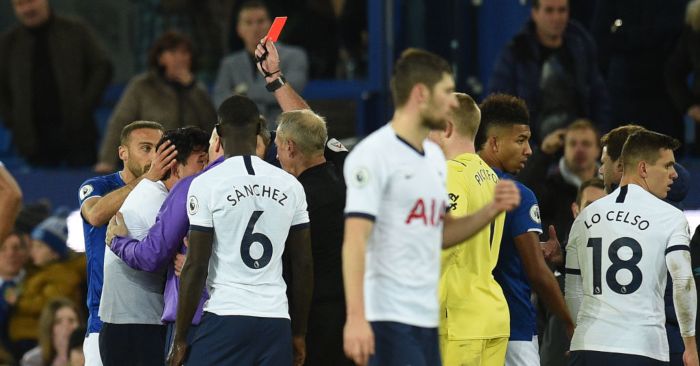 As two minutes of first-half stoppage-time was announced, the camera panned to Gareth Southgate. He shifted uncomfortably in his chair, presumably wondering why he had decided to spend his Sunday evening on Merseyside instead of at Selhurst Park.

He was not alone.

There was no deafening Goodison Park roar, no one player from either side attempting to rouse their teammates from a collective slumber. The only discernible movement was in the homes of the viewing public as they regained consciousness for just long enough to retrieve the remote control and change the channel to something more stirring.

Countryfile at least offers visual appeal; Agatha Christie’s Marple guarantees a compelling plot and protagonist worthy of investing time in. But the first half of Everton’s game with Tottenham sat somewhere close to Points of View on the morbidly tiresome scale.

The half-time highlights told quite the story. An overhit Serge Aurier cross; an Andre Gomes header that might still have gone over if there was a second goal placed directly on top of the first; a Richarlison effort that cut daisies that no player seemed ready or willing to tread on.

Yet the lack of substitutions was potentially the most damning aspect of all. Marco Silva and Mauricio Pochettino both watched 45 minutes of utter dirge and were content enough not to tinker with personnel, and only somewhat with their systems.

That a belligerent refusal to fix what was clearly broken actually worked in favour of the latter does not justify his inaction. Dele Alli’s opener was created not through a flowing team move or excellent individual play – although it was well-taken – but as a result of player error. Alex Iwobi looked to have inadvertently cost Everton a positive result and possibly his manager’s job with a horrible pass.

Cenk Tosun’s late equaliser meant that Everton and Tottenham meandered to a point that flattered both and helped neither. But it gave no more relevance to a game that was rendered almost meaningless by a refereeing performance that added grave insult to a sickening injury.

Taking everything into account, that was the worst game of football I’ve ever watched.

Yerry Mina fouled Heung-min Son. The South Korean exaggerated his fall but there was a clear and obvious infringement. Yet nothing was given.

Dele Alli handled the ball. It was not deliberate, it hardly prevented a goalscoring opportunity and there was no time for him to realistically avoid the contact, but it was handball. Yet nothing – after a check that lasted over three minutes – was given.

Son fouled Gomes. It was late, cynical and unnecessary, and initially awarded a yellow card by Martin Atkinson. Yet the referee, having subsequently witnessed the extent of the gruesome damage, upgraded the punishment to a red card.

It was a perfectly understandable human reaction in the heat of the moment. Atkinson realised the severity of the situation and knew he had to be seen to act accordingly. It was the wrong call made with the right justification; his initial judgement was correct. It was a horrible accident rather than an act of malice.

Yet VAR was designed and implemented to eliminate such human errors, to reduce the game to a microcosm of black and white, replays and slow motions, justice for all. That it simply reinforced a wrong decision, seemingly for fear of reprisal from a home crowd understandably demanding strong action, proves that the technology is either unfit for purpose, in the wrong hands or both.

Everton would equalise, but it just felt utterly insignificant. They are three points above the relegation zone but it seems entirely trivial. Tottenham are 11th, but that is inconsequential. They have still not won away in the Premier League since January but it is an empty and hollow statistic.

This was a car crash of a match, but without the added intrigue that requires you to slow down and view. A dreadful game between two aimless teams and two confused managers was exemplified by a dreadful injury and an utterly woeful example of officiating that even Southgate, the world’s nicest man, must have been appalled by.

Is this really what the Premier League envision to be entertainment?