Home All The News Italy proved that they have ‘cojones’ – Giaccherini 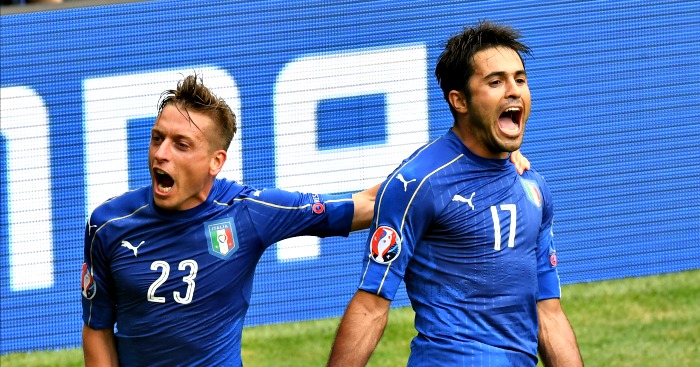 Antonio Conte’s squad had been criticised for being among the worst national teams in Italy’s history in the build-up to Euro 2016, but they have already progressed to the knockout stages after Eder’s 88th-minute finish secured their second straight win.

Group E leaders Italy next face the Republic of Ireland in their final group fixture on Wednesday, when second-placed Sweden meet Belgium. Ireland and fourth-placed Belgium play on Saturday.

“This Italy side proved it has cojones,” said Giaccherini, who scored in their impressive 2-0 defeat of Belgium, according to Eurosport.

“(This) game was far more difficult compared to Belgium, as we knew Sweden would sit deep and refuse to give us any spaces. They made it hard for us to find width too.

“We felt rather nervous and anxious in the first half, as we felt the pressure of the occasion, but we did much better as time wore on and deserved the victory.”

Eder’s goal came after a classy run through Sweden’s defence, and he spoke of the satisfaction he has taken from Italy’s team spirit.

“It was a joyful moment. (Fellow forwards Lorenzo) Insigne and (Ciro) Immobile didn’t play, but they came on to hug me at the end and that shows our closeness”, he said.

Sweden, whose performance was superior to that in the 1-1 draw with Ireland, are regardless on the brink of elimination and must defeat Belgium next week to stand any chance of progressing.

“We had the chance with Zlatan (Ibrahimovic), but we didn’t create enough difficulties in the end,” said coach Erik Hamren, according to Italian Football Daily. “They worked hard, but we didn’t do enough for a draw.

“We had a few chances, but we didn’t score, however we played against a team that defends very well, even Belgium didn’t succeed in scoring against Italy. Sure, it would’ve been better to have more chances, but I assure you that we tried, but the defence did their job.”