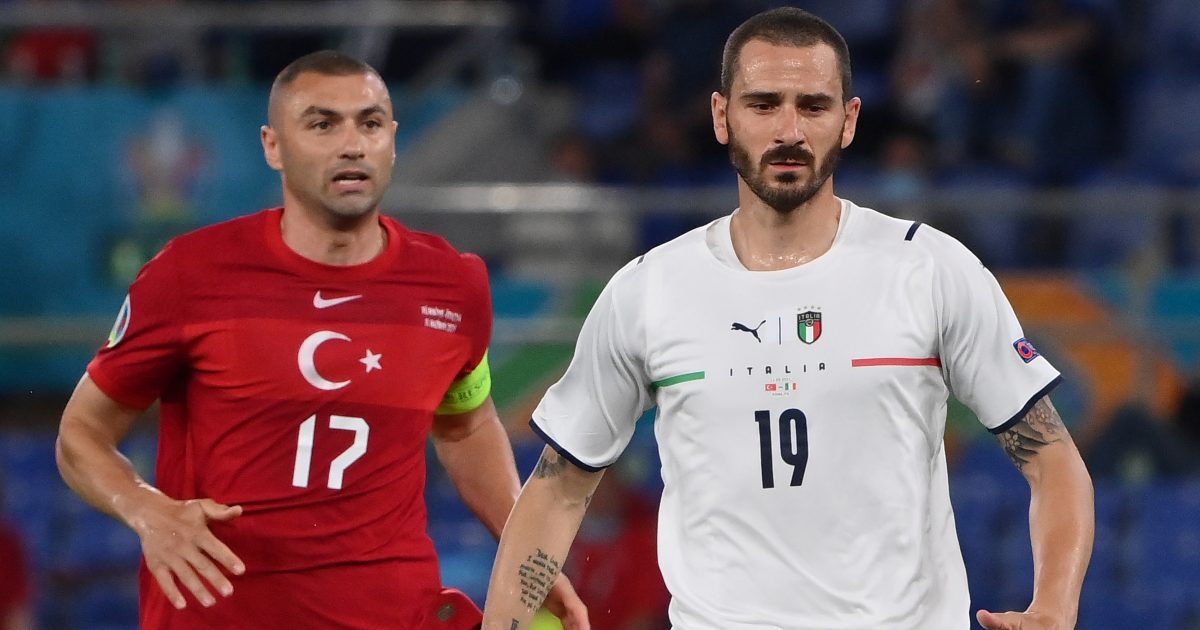 Italy defender Leonardo Bonucci has suggested that England’s performance against Croatia impressed him as they have “stood out” so far at Euro 2020.

England, who are in Group D, opened their campaign with a 1-0 victory over World Cup finalists Croatia at Wembley on Sunday.

Bonucci was speaking on Tuesday afternoon, prior to the first games in tournament for France, Germany and Portugal, but nevertheless admitted England had caught the eye.

The 34-year-old said: “Besides the teams that still need to play – who will of course impress us because they are all top countries – England have really stood out to me.

“For the approach they showed, the way the were willing to work hard for one another and the fact they sought three points, England are the team that have impressed me most so far.”

Bonucci had presumably temporarily removed Italy from the equation as he gave that particular answer at a press conference to preview his side’s second Group A match against Switzerland in Rome on Wednesday.

Italy were also on form as they opened the tournament by sweeping Turkey aside 3-0 last Friday.

It was a ninth win in succession for Roberto Mancini’s side, all of which have been achieved with clean sheets.

Bonucci said: “This is the greatest team spirit I have encountered. At no time have there been any issues in the squad. It is a very tight group and it is little wonder then that we are getting results.”

Bonucci was also asked about whether the Italian players would take the knee to highlight racial inequality and discrimination ahead of the game, as the Swiss did prior to their 1-1 draw against Wales.

He said: “Clearly we are all against any form of racism and discrimination. At this moment in time I don’t think there has been a specific request from UEFA to actually conform. This is up to all national FAs, but we are very much standing against racism.”

Italy will need to quell the threat of Swiss playmaker Xherdan Shaqiri, who is relishing the chance to shine against a side managed by his former Inter Milan boss Mancini.

Shaqiri, who is now at Liverpool, was brought to Inter by Mancini in January 2015 but failed to earn a regular place in the side and left for Stoke just six months later.

Shaqiri said: “I am really looking forward to the game and I look forward to seeing Roberto. He is a great person and I am really happy that it is going well for him and he has made Italy a top team.

“They are one of the favourites for this tournament. They will try to attack. It is not the Italy that used to defend all the time.

“It will be a challenge but we will try to create problems for them. It will be a difficult game but we are confident.”

Italy could make one enforced change with right-back Alessandro Florenzi doubtful with a calf injury.