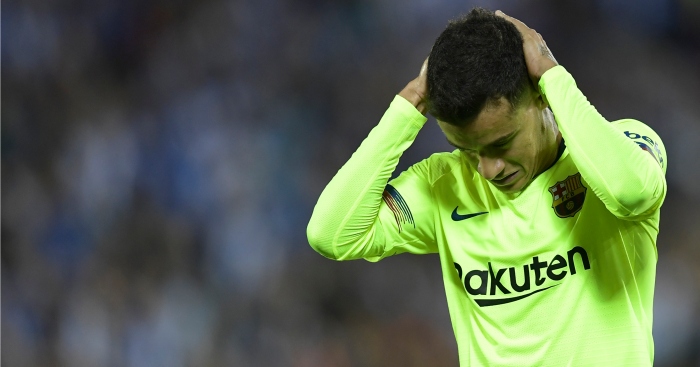 While England’s top sides were beginning (and some ending) their Carabao Cup campaigns this midweek, Spain’s top flight had a full round of league fixtures. And what a round it was.

Kicking off at 8pm Tuesday, and culminating just before midnight on Thursday, the first midweek programme of the new campaign threw out some remarkable results, some incredible goals and moments of individual skill.

Tuesday night saw Espanyol continue their fine start to the season with a 1-0 win over Eibar, before Willian José’s late equaliser saved Real Sociedad from falling to a home defeat against La Liga new boys Rayo Vallecano. Later that night, Atlético Madrid barely broke a sweat as they coasted to a 3-0 win over Huesca at the Wanda Metropolitano.

Tuesday night was entertaining enough, but Wednesday will go down as one of the classic La Liga match-days. The evening kicked off with two concurrent fixtures: Villarreal’s visit to San Mamés to play Athletic Club, and a top v bottom clash between Barcelona and Leganés.

In Bilbao, a virtuoso performance from Pablo Fornals inspired a resurgent Villarreal to a deserved 3-0 victory over struggling Athletic. The 22-year-old opened the scoring with a spectacular 40-yard strike, and provided the assist for Karl Toko Ekambi for Villarreal’s third. He also produced several key passes, and caught the eye with an outrageous price of skill that left Athletic’s Íñigo Martínez chasing shadows.

Barcelona were expected to roll Leganés over, and manager Ernesto Valverde felt confident enough to rest Luis Suárez, Jordi Alba and Nelson Semedo, with Thomas Vermaelen and Munir El-Haddadi returning to the side. It looked like it would be a procession for Barca when Philippe Coutinho opened the scoring after just 11 minutes, and a newly-beardless Lionel Messi curled a shot into the angle of the post and crossbar. However, early in the second half, Leganés forward Nabil El Zhar escaped Vermaelen to head home from a somewhat hopeful cross, and just a minute later, Gerard Piqué gifted to ball to Real Madrid loanee Oscar Rodríguez in the box, who gave the hosts a surprise 2-1 lead.

With 37 minutes left to play, Barcelona were still heavy favourites to come back and win the tie, but were unable to create any worthwhile chances until the 80th minute, when Iván Cuellar made a spectacular double save from Coutinho and Ivan Rakitic. Leganés were able to hold on to secure a huge victory, their first of the season, and become only the second team to defeat Barcelona in the league since Valverde took over.

Just after Barcelona’s defeat was confirmed, Real Madrid took to the field with a fantastic opportunity to go three points clear of their hated rivals. One small snag – their opponents happened to be Sevilla, who had won five of their previous six meetings with Real Madrid at the Sánchez-Pizjuán. The hosts are on a fine run of form as well, having won all three games since their derby defeat to Real Betis, scoring 13 goals in the process.

That being said, you would have expected Real Madrid to put up at least some resistance. As it happened, they immediately crumbled under waves of Sevillian attacks, with Marcelo and Raphael Varane in particular unable to cope with the pace of Jesús Navas and the movement of André Silva. Silva scored two first-half goals to bring his tally for the season to six goals in as many games. Wissam Ben Yedder added another before half time, and a shellshocked Real Madrid went in 3-0 down. Lucas Vázquez, Mariano Díaz and Dani Ceballos were all introduced in the second half as Real Madrid tried to force their way back into the match, but had little effect as Sevilla comfortably held on to inflict a damaging defeat on the European champions.

While Real Madrid’s capitulation was unfolding in Andalucia, there was another game taking place on Spain’s east coast. Valencia played host to Celta de Vigo, and the home side suffered yet more disappointment as Iago Aspas’ late goal cancelled out Michy Batshuayi’s first-half strike, rescuing a point for Celta and leaving Valencia winless in their first six games of the new campaign.

After the dramatic events of Wednesday, Thursday’s games were something of a comedown, but there was some intrigue to be found nonetheless. A dramatic reversal of fortunes continues for Levante, who finished last season at the very top of the form table. A 2-1 defeat to Real Valladolid now makes it five matches without a victory for the Valencian side.

In further contrast to last season, 2017-18’s great entertainers Real Betis have actually been pretty dull so far this term. They secured an uneventful yet valuable 1-0 win at Girona on Thursday night, scoring only their fourth goal of the season in the process, the joint-lowest total in the league.

Finally, the surprise package of the season so far, Alavés, missed their chance to go joint top with Barcelona and Real Madrid after they could only manage a 1-1 draw with Getafe.

After an eventful midweek, the playing field has been levelled somewhat, and now the top six are separated by just three points. It’s shaping up to be a competitive season, and this midweek has shown that any team can take points from any other. Barcelona and Real Madrid are certainly fallible, and Atlético Madrid and Sevilla in particular look well placed to challenge them.